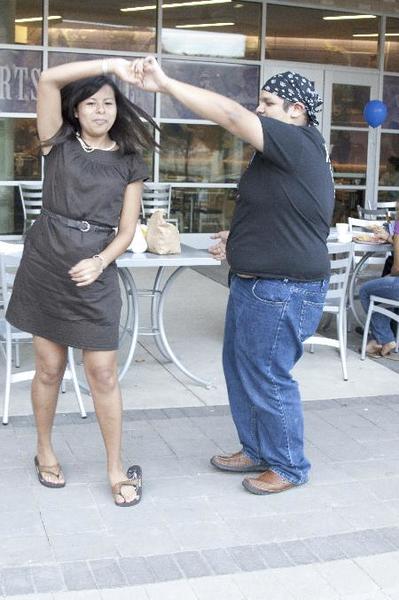 The success of the first Hispanic Heritage Month carnival led to the Chi Upsilon Sigma sorority’s adoption of the event for future Hispanic heritage celebrations.

The beat of bachata, reggae and salsa music accompanied the savory smells of Salvadoran pupusas, corn and chicken tamales and ground-beef tacos at the event. National Hispanic Heritage month started Sept. 15, and as part of the sorority’s “Week of Wisdom,” the Chi Upsilon Sigma sorority – a Latin sorority – scheduled events throughout the week in celebration, including a showing of “Slumdog Millionaire” and a dinner at Gloria’s Restaurant.

Amanda Kruse, president of the sorority, said 40 people attended the event, which was twice the number that was initially expected. The sign-in sheets sat on the food table from which stemmed a long line of event participants.

Kruse said a carnival did not have to include games but could just be a celebration of diversity.

“It’s really important to us because Hispanics come in all different shapes and sizes, and most importantly, shades,” Kruse said. “It’s not an identity; it’s more of a region where people live.”

Posters of the 21 different countries representing the Hispanic heritage were placed on the patio tables with information about each country.

“Overall the weather worked out, and I really enjoyed the information on the tables about the countries because it gave me a good grasp on each country’s culture,” said Beatriz Gutierrez, a Student Development Services employee.

“We were just expecting another one of their events where they teach you something cultural,” said Paola Solis, a member of the Sigma Lambda Alpha sorority.

Solis said the event was a good way to bring Hispanic awareness and that she would want to participate again.

Olivia Stribling, a participant with Student Support Services, said she wanted to show her support for the Hispanic community, catch up with friends and get some food.

While most people left after they ate their food, others lingered long enough to share in the dancing.

“I was entertained by the music that they incorporated with their carnival,” Martinez wrote in an e-mail. “Definitely made me shake my groove thang.”