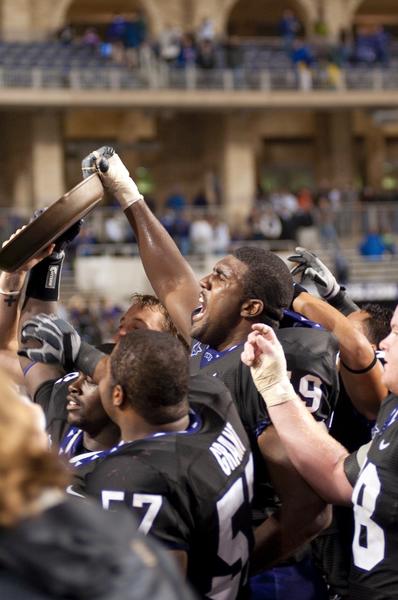 In 1915 the Horned Frogs battled the SMU Mustangs for the first time in a game that later became known as the Battle for the Iron Skillet. Ninety-five years later the Iron Skillet is getting even hotter.

Senior safety Jeremy Kerley said he wasn’t sure what the skillet was or what its history was when it was displayed at a press conference Tuesday.

“That’s the big rusty skillet…I had no history of the iron skillet game or iron skillet or anything,” Kerley said.

The “rusty skillet” tradition started during the post-World War II era when college football was booming in popularity. The tradition died when the skillet was misplaced over the years until, in 1993, the student bodies from both universities decided to revive the Iron Skillet tradition.

The Iron Skillet is given to the winning team after each game between the rival schools. The Frogs had first possession of the most recent edition of the trophy after their 21-15 win in 1993.

Quarterback Andy Dalton said that a strong rivalry exists between SMU and TCU, especially now that the SMU program is on the rise. Dalton said he wants to make sure the skillet stays on the TCU side.

In 2005 the Horned Frogs upset BCS automatic-qualifier and powerhouse University of Oklahoma, then ranked No. 7, by a margin of 17-10. Just a week after the upset over the Sooners, the Frogs traveled to SMU, lost to the Mustangs 21-10, surrendered possession of the Iron Skillet and their six-game winning streak against the Mustangs.

“We didn’t get our heads out of the clouds after the Oklahoma win,” Patterson said. “This is the first year we don’t have somebody that was part of that game.”

The Frogs’ loss to the Mustangs was their only loss during the 2005 season and the only loss to SMU under Patterson. As head coach, Patterson has won seven of the eight games he has coached against the Mustangs.

“SMU is a good football team and it’s always a war, always a war when we play over in (Gerald J.) Ford Stadium,” Patterson said.

The Frogs currently have possession of the skillet after recapturing it in 2007. The past three games have a combined score of 108-28, the most recent game being a 39-14 TCU win last season.

Senior tight end Evan Frosch said the rivalry was not so much about the keeping the skillet as it was about winning the game and keeping the season the way the Frogs want it to be.