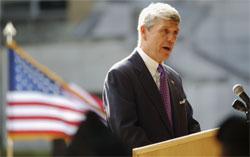 TCU veterans reunited with fellow comrades Saturday as they strolled past the names of fallen Horned Frogs displayed on granite plaques at the dedication ceremony of TCU’s Veterans Plaza.The Veterans Plaza, a $150,000 project funded by private donors and initiated by Texas Secretary of State and TCU Board of Trustee member Roger Williams, celebrates the lives of Horned Frogs who served in both World Wars, Korea, Vietnam, the Persian Gulf, Afghanistan and Iraq, said Chancellor Victor Boschini.

“For years, the memorial columns have honored TCU alumni who died in both World Wars,” Boschini said. “But there wasn’t a landmark to honor the lives of those who served in other armed conflicts.”

The memorial, located to the east side of Reed Hall, features garden areas and a grove of trees surrounding structures that display the names of TCU students who are known to have died in service. The memorial extends across University Drive to a fountain on the west side of the Mary Couts Burnett Library.

One student said he enjoys the fountain but hopes administrators will continue to work on the appearance of the memorial.

“Everything looks great, but I think they should plant grass or something because the dirt isn’t very appealing,” said Joe Mikolaj, a sophomore vocal performance major.

Crushed granite, the material that resembles dirt, was used around the memorial in order to create a natural design, Boschini said.

George Runnion, Class of ’51, and David Wright, Class of ’47, who met in high school and served in World War II together, said the memorial is impressive.

“I didn’t expect it to be so beautiful,” Wright said. “I’m really glad that TCU did this. It really means a lot to us.”

Williams said he was adamant about creating a memorial for veterans who served in combat because he considers veterans to be TCU’s most important alumni.

“We have a hall of fame for athletes and musicians, but we lack a fitting memorial for veterans,” Williams said. “Today’s real heroes are not riding in limos or walking the red carpet. Today’s heroes are riding in Humvees, patrolling Baghdad and Kabul.”

During the ceremony, Charles Powell Jr., Class of ’61, shared the story of his brother William Elmo Powell’s death in Vietnam in 1968.

“He had to complete 100 missions in order to be released from duty, and he was shot down by enemy fire on his 94th,” Powell said. “He was 25 years old when he was killed and his remains were delivered to us 20 years later for burial.”

“I can’t express how appreciative I am for that and for this memorial,” Powell said. “Elmo loved TCU and he would have thought this memorial was great.