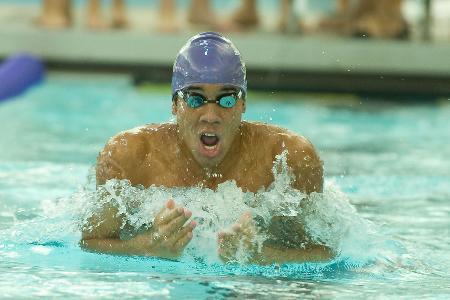 Edgar Crespo has been in the United States for less than a year, and it shows.

Frantically searching to find the right verb conjugation, he will sometimes try three forms of a word on for size before he finds one that fits.

The noticeable thing about the Olympian from Panama is the look of determination on his face when he goes through this process. Eyebrows sloped downward. Lips slightly pursed. An invisible fire burning in his brown eyes.

It is this same level of determination that has driven him to rise from humble origins and swim in the Beijing 2008 Summer Olympics.

And yet, the 19-year-old who competed in the same fabled Water Cube as Michael Phelps wasn’t allowed to even dip his toe into the pool during a Horned Frog swim meet.

Crespo didn’t always glide on top of the water.

Enrolled in a swimming class at a local school in Panama City at eight years old by his mother, he was a little apprehensive at first.

Coupled with an allergic reaction to the heavily-chlorinated pool, Crespo didn’t realize right away that he had found his calling.

Although he can’t pinpoint exactly when, Crespo eventually got over his allergy, his dislike of the sport and began to thrive in the pool.

Crespo’s swimming prowess allowed him to enter the Olympic qualifying cycle in 2005, a goal that 11-year-old Crespo had set five years earlier.

After swimming in multiple qualifying tournaments over the years, Crespo was chosen to represent Panama in the 100-meter breaststroke.

One of only five Panamanians in the Olympic games, Crespo and Christie Marie Bodden Baca were the only two competing in swimming events.

Despite the eyes of the world being on him, Crespo said he felt “good and comfortable” when he arrived in Beijing.

He was in awe of the now-famous opening ceremony of the Olympics, Crespo said.

“The crowd was excited,” he said. “I was excited. I almost cried. I fulfilled a dream from eight years ago.”

But he didn’t have any time to bask in the glory of the $100 million spectacle. He had to be up the next morning to participate in the first day of competition.

However, the time of the race was switched so it could be aired during prime time in America. It would now be in the afternoon instead of the morning. Crespo, who relies on an exact schedule in preparing for his race, said the sudden change in the race’s time threw his routine off.

Despite the pressure and time change, Crespo said he wasn’t a bundle of nerves before he swam in his heat.

His relaxation paid off. He finished first in his heat of the 100-meter breaststroke with a personal-best time of 1:03.72.

But his time was not good enough to advance to the 16-person semifinals. His Olympic experience ended after one race.

Frog Out of Water

Swimming in the Olympics resulted in his TCU swimming career being put on hold for a year because of an NCAA rule violation.

Crespo remembers exactly how he felt when he heard the news. A gut-wrenching feeling of despondency washed over him as the reality of the situation set in.

“I felt sad because I came to TCU to swim,” Crespo said. “I was really frustrated.”

Bill Koppelman, an assistant coach for the swimming and diving team who recruited Crespo, said there is a rule in place that allows a one-year grace period after high school for any NCAA swimmer-to-be to compete in any international competition.

However, thanks to the fact that he graduated from high school in December 2006 and that some of the Olympic qualifying meets were after that one-year period, Crespo had violated the rule. Competing in the Olympics, however, was allowed.

Crespo and the coaching staff were aware of the violation for a few weeks before the penalty was handed down, but held out hope until the final hour that the NCAA would see the case as a special circumstance and grant Crespo eligibility. The NCAA did not.

Koppelman said TCU filed an appeal on Crespo’s behalf, but it was rejected.

Crespo was also unable to use a redshirt this year, so he can only compete three years instead of the usual four, Koppelman said.

Once he hits the pool in the fall, the consensus in the team is that Crespo will be an elite-level performer.

Teammate Maria Alvarez said Crespo’s work ethic is an inspiration to the rest of the team.

Koppelman said Crespo will break some records, noting that Crespo came within 1/100 of a second of the school record in the 100-meter breaststroke in a solo time trial after a meet. Crespo’s ability is as natural as can be, he said.

“When you watch elite-level swimmers, the trait they have is they make it look easy,” Koppelman said. “You don’t really have to coach him. He has a lot of natural ability.”

Despite some self-pity at the outset, Crespo maintains a positive attitude and doesn’t stress about what might have been.

“I will be honest,” Crespo said. “When that happens to a person, they will be sad at first. But they need to change their mind and not feel sorry for themselves.”

Crespo said his main focus right now is to support and encourage his teammates as much as he can, while hoping that something greater will come from his setback.

“I am Catholic,” Crespo said. “I am a Christian. I know God has planned for something better to come of this.”