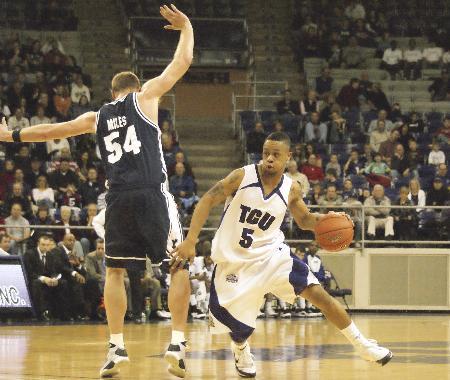 The two teams meeting Wednesday night in Daniel-Meyer Coliseum have combined to lose their past 18 games. With each team looking to break out of its funk, there certainly shouldn’t be a lack of effort on the court.

“Something’s going to break here, either us or them,” head coach Jim Christian said. “(Air Force is) hungry and they’ve played well.”

The Horned Frogs squeezed out a 57-54 victory on the road against Air Force Jan. 17.

Christian said his team is upset with its play of late.

“The team’s frustrated – everybody’s frustrated.” Christian said. “We haven’t been able to play for 40 minutes and do the things we’re capable of doing.”

Poor shooting has plagued the Horned Frogs’ offense. The team has managed to connect on just 38.6 percent of its shots during the losing streak.

It doesn’t help that the team has allowed opponents to hit 53.4 percent of their field goal attempts in the same time period.

It is a combination of these factors that has put the team in its current position, sixth place in the Mountain West Conference, Christian said.

Next game
What: TCU vs. Air Force Academy When: 7 p.m. Wednesday Where: Daniel-Meyer
Coliseum


“We’re not guarding as well as we were earlier in the year and if you’re not going to do that you can’t win in this league,” he said.

Christian said one of the positive things he’s been able to take out of the losing streak is that some of the team’s younger players are gaining valuable experience. The lessons learned during recent struggles are tough to take, but they will only serve to aid the team in the future, Christian said.

“Those things, at the end of the day, they help the program move forward,” Christian said.

The basketball team’s first season under Christian’s guidance is rapidly winding down. The Horned Frogs have played 25 of 30 games, but for Christian that number seems a little low.

“Right now it feels like 125 (games),” Christian said. “We’ve had our ups and downs, but we’ve also shown signs of doing some really good things.”