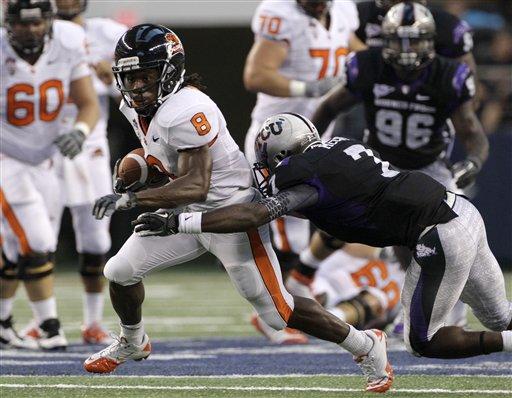 ARLINGTON, Texas 8212; The Horned Frogs will likely have to be perfect again in the regular season for the chance at a BCS do-over.

The Frogs did not disappoint and pulled through with a win legitimizing their rank of 6th in the nation despite a less-than-perfect performance.

Andy Dalton ran for two touchdowns and threw for another score, making up two interceptions and leadingTCUto a 30-21 victory Saturday night over No. 24 Oregon State, which just missed making it to the Rose Bowl last season.

“We just beat the a 24th-ranked team that I think should be ranked higher. I think it was a pretty good game. That’s how I judge quarterbacks,” coach Gary Patterson said. “A game like this, it didn’t have to be style points.”

Eight months after Dalton threw three interceptions in a Fiesta Bowl loss to Boise State that soured the Horned Frogs’ breakthrough season, he scored on a 4-yard keeper at the end of the third quarter to putTCUahead for good.

“I didn’t play the way I’m capable of playing,” Dalton said. “That is unacceptable on my part.”

The fourth-year starter has set some high standards.

Dalton hit 17 of 27 passes for 175 yards and ran 17 times for another 64 yards while becomingTCU’swinningest quarterback. His 30th career victory snapped a tie with “Slingin’ Sammy” Baugh, who had held the mark alone since the mid-1930s.

Ed Wesley ran for 134 yards and a touchdown on 17 carries. Jeremy Kerley caught six passes for 49 yards and a score, and set up a touchdown with an impressive punt return.

The loss spoiled the homecoming for brothers Jacquizz and James Rodgers. Both scored touchdowns for Oregon State in their first college game in their home state. They are from Richmond, about 4ÃÂ½ hours south in the Houston area.

“Those guys did a great job containing us, but we left a lot of plays out there today,” said James Rodgers, who had four catches for 75 yards.

Jacquizz Rodgers, who ran 18 times for 75 yards, was the Texas AP high school player of the year in 2007, playing at Lamar Consolidated.

Dalton’s interceptions came on the firstTCUdrive of each half, and both led to Beavers touchdowns.

Linebacker Dwight Roberson stepped in front of tight end Evan Frosch on a short third-down throw at the Beavers 13 in the second half 8212; after the Frogs had held the ball for seven minutes. That led to Jacquizz Rodgers scoring from a yard out for a 21-all tie.

“I didn’t let those (interceptions) affect me,” Dalton said. “I knew I had to come back and play well.”

Dalton threw only five interceptions in the regular season a year ago. He now has five in his last two games.

Ryan Katz made his first start at quarterback for the Beavers and was 9 of 25 for 159 yards and two touchdowns. He also had to kick the ball out of the back of the end zone for a safety with about 4 minutes left. The play also gave the ball back toTCUand pretty much ended any chance the Beavers had to come back.

Katz was calling an audible when the center snapped the ball over the quarterback’s right shoulder.

“We should have stayed with the play,” Katz said. “That was on me. It was just a bad check.”

Kerley caught a 1-yard touchdown to tie the game at 14 midway through the second quarter, then set up another score before halftime when he took a low punt on the run and bolted 34 yards up the right sideline.

While not as gutsy as the fake punt Boise State used to set up the decisive score in the Fiesta Bowl against TCU, the Beavers used a little trickery of their own. On fourth-and-1 from its 43, Hekker took the deep snap and then threw a 23-yard pass to Jordan Poyer.

Dalton was picked off by Lance Mitchell at theTCU31 onopening drive and two plays later, Katz hit James Rodgers running open into the end zone for a 30-yard score.

Dalton quickly made up for his first turnover scrambling in from the 6 to tie it at 7.

“Andy is a really good leader. He doesn’t let the play affect him,” said defensive end Wayne Daniels, who had both ofTCU’ssacks. “He plays every play like it’s a brand new play. Since he does it, we all do it.”