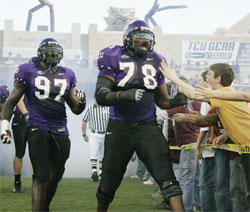 The Horned Frogs (6-2 overall and 2-2 conference) will be looking for their fourth straight win, third in the Mountain West Conference, when they head to Albuquerque, N.M., to face the New Mexico Lobos (5-4, 3-2) on Saturday.The Frogs and the Lobos have met seven times before, with the Frogs winning four out of the seven, including last season’s 49-28 victory in Fort Worth.

This will be head football coach Gary Patterson’s first trip back to New Mexico since he coached there in 1997. Patterson will also be going for his 50th career win as a head coach, all of which have come at TCU.

“New Mexico is special, because it was my first chance to be a Division I defensive coordinator,” Patterson said.

TCU’s No. 4-ranked rushing defense will be tested this weekend by the Lobos, Patterson said. Most of the Lobos’ rushing attack comes from sophomore running back Rodney Ferguson, who is averaging 79.2 rushing yards per game. Earlier this season, Ferguson had a career day against the UTEP Miners as he went for 162 yards on the ground.

“They work out of a two-back set which causes a lot of problems,” Patterson said. “Every week has a different challenge, and this week is no different.”

The Lobos use several trick plays when they have the ball, Patterson said.

“There’s a lot of preparation that goes into it for us,” Patterson said.

Patterson credits the offensive line, which has allowed only nine sacks all season, for part of the offense’s successes this season.

“We’ve never given up a lot of sacks,” Patterson said. “If you look in the conference, we’re among the leaders in total offense.”

Patterson said the biggest problem for the Frogs’ offense has been capitalizing on scoring chances.

“The key is we haven’t gotten the ball in the end zone when we’ve been in the red zone,” Patterson said.

One of the most crucial players on offense has been the play of sophomore tight end Shae Reagan, who moved from quarterback to tight end this season, Patterson said. Reagan has only seven catches this season, but he has 154 yards receiving with one touchdown, and all of his catches have been for first downs.

“He’s stayed healthy and made some big catches and big plays,” Patterson said. “Shae has also made progress with his blocking. When you move from quarterback to tight end, you don’t have to stick your head in there very much.”

The Frogs’ defense has also been playing well and a big part of that is senior safety Marvin White, Patterson said. White leads the team with 40 solo tackles and is tied for the team lead with three interceptions. White also won TCU’s Male Athlete of the Week this week for his play against the UNLV Rebels, which included his first career sack.

“He has improved a lot from a year ago when he was second-team all-conference,” Patterson said. “He’s been very good at being a leader, understanding the defense and what people are trying to do to him.”

Junior kicker Chris Manfredini is 8-10 on field goals on the season and has been named to ESPN The Magazine Academic All-District Team. He will now be on the Academic All-American ballot.

Patterson is expecting an intense crowd for this weekend’s game.

“We like playing in that kind of environment,” Patterson said. “It makes for a great game.