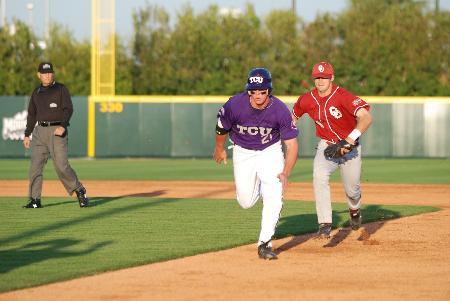 It took a 12-inning effort from the University of Oklahoma to finally beat the Horned Frogs negating a three-run, ninth-inning rally from TCU.

“It was just one of those nights where it didn’t go our way,” sophomore catcher Bryan Holaday said. “I mean, we’ve won nine straight, but this one was tough to swallow.”

Redshirt junior Seth Garrison had another strong midweek start, lasting until the seventh inning and throwing more than 100 pitches. He held the Sooners scoreless through six. Oklahoma starter Ryan Duke, who attended high school with Garrison in Corpus Christi, had a strong start as well.

The Horned Frogs finally broke up the pitchers’ duel in the fifth when Ben Carruthers flied out to score junior first-baseman Matt Vern and looked to increase their lead as Duke was replaced in the sixth.

Garrett Richards came in for relief and after a ground out, loaded the bases on two singles and a wild pitch hit Matt Carpenter. With two outs, Vern stepped up to the plate and was struck out as Richards found his mark.

Oklahoma finally found their game in the seventh.

The Sooners rallied in the seventh as Casey Johnson and Trey Sperring provided two RBIs to give Oklahoma a 2-1 lead. The TCU offense sputtered in the eighth as Holaday grounded into a double and Carpenter grounded out to end the inning.

Oklahoma’s offense would strike again for two runs in the ninth, as they built up a 4-1 lead and left it up to the Frogs to show some more late-inning magic. Two of TCU’s weekend games against the University of Nevada, Las Vegas were decided in the ninth or later.

“The rally was something we really needed, and all year we’ve been competing in late innings,” Holaday said. “We just weren’t going to give up.”

Hunt Woodruff led off in the bottom of the ninth with a double, and Vern filled in behind him after a walk. After a single from Carruthers, the bases were loaded with the Frogs still down three.

Bryan Kervin singled to bring Woodruff home, and Chris Ellington added an RBI single of his own to make the score 4-3 Sooners. Jimmie Pharr stepped up to plate with the game on the line. One sacrifice fly later, the game was evened up 4-4.

Holaday lined out down the first base line to end the inning and send the game to 10, as junior reliever Andrew Cashner took the mound searching for his eighth victory on the year.

Cashner responded by striking out the side and then repeated the feat when called on in the 11th, at times hitting 97 mph on his fastball. Meanwhile, the offense continued to struggle to get anything going in the late innings.

The Sooners opened the 12th loading the bases for catcher J.T. Wise, who flied out to right field scoring Tyson Seng and bringing the score to 5-4 Oklahoma. The Horned Frogs escaped without further damage, but the one-run gap was enough.

“I gave everything I had tonight,” Cashner said. “I just couldn’t make the pitches when I needed to.”

The offense couldn’t answer in the 12th, and TCU’s nine-game streak was snapped. This weekend they face BYU in Provo.

“We love going up there and playing,” Woodruff said. “They have great fans, a great atmosphere and a great ballpark and it’s one of our favorite places to go up and play. Hopefully we can go up and beat those guys.”