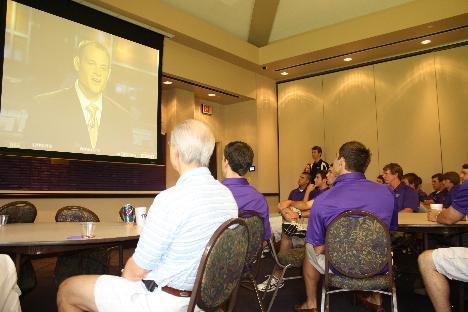 Any Horned Frog baseball fan who has taken in a ballgame in the past few years has always found Matt Carpenter roaming the infield. Carpenter has become very accustomed to that boomerang-shaped pile of brown dirt, playing on it for the past five years. Friday, he will finish his TCU career seeing baseball at Lupton Stadium in a brand new way.

For the first time in its long history, the TCU baseball team will host a regional in the NCAA Baseball Tournament. Joining the top seeded Horned Frogs are Texas A&M, Oregon State University and Wright State in order of seeding.

“What a way to go out,” Carpenter said. “Get a chance to win a regional at your home field. I’m really looking forward to it.”

Head coach Jim Schlossnagle recognized Carpenter’s long term dedication to the program and is just as excited to see Carpenter’s hard work pay off as he is to host the regional.

“When I got a text message that said we were in, the very first person I called was Carp,” Schlossnagle said. “That guy has been through everything here. He’s pretty much hosted every recruit to help get players here. He’s had a transformation in his own personal life from his body, to his diet, to his academics. Things like that are why I continue in this profession because you get to see the joy on that guy’s face.”

And Carpenter’s excitement was evident.

“I called him at about 2:29 yesterday and by 2:45 he was in the locker room and by 3:00 he was dressed and we didn’t practice till 6:00,” Schlossnagle said. “He was like a little leaguer waiting for his first game.”

Now all that’s left for Carpenter to accomplish is to get past the first round of the NCAA Tournament and make it to a Super-Regional. First, the Horned Frogs will have to get past Wright State.

TCU last played Wright State in 2006 in a three game series in Fort Worth. The Horned Frogs took two of three games to win the series. While Scholssnagle said he wasn’t very knowledgeable on Wright State’s team this year, he does know a lot about their head coach Rob Cooper. The two coached together at Tulane.

Also in the Fort Worth Regional are two-time National Champion Oregon State and the pre-season No. 1-ranked Aggies. Despite being out of Baseball America’s top 25 going into its conference tournament, A&M was thought to be a competitor with TCU for the third host site in Texas. Now, not only did the Aggies not get to host, they are coming to Fort Worth as the No. 2 seed.

“It’s a tough regional,” Carpenter said. “Oregon State and A&M have a lot of tradition with really good teams. It should be a challenging regional but we’re looking forward to it.”

The Horned Frogs will play their first game of the regional Friday at 7 p.m. The tournament begins at 2 p.m. with the A&M and Oregon State game. Schlossnagle said junior righthander Paul Gerrish is the probable starter for Friday’s game.

Schlossnagle’s message to the Horned Frog nation who have been waiting for the NCAA Tournament to come to Fort Worth was direct.

“Put up or shut up,” he said. “We need people to buy a ticket and more importantly we need them to come to the games. Not just the games TCU plays but all the games. There’s 302 or so division one college baseball teams and only 16 get to host a regional and TCU is one of them. You need to be at the ballpark.”

-TCU is 0-3 against Texas A&M under head coach Jim Schlossnagle, taking two losses in College Station and one in Fort Worth.

-Gerrish is 5-2 in seven starts and 15 appearances. He has a 4.02 ERA in 47 innings pitched with 47 strikeouts and 16 walks. In his last appearance against Utah in the conference tournament, he went three innings with five runs on nine hits with four strikeouts and two walks.

-Redshirt freshman Aaron Schultz, who suffered a separated shoulder in TCU’s first game of the conference tournament, has practiced the past few days and should be ready to go for the regional, according to Schlossnagle.