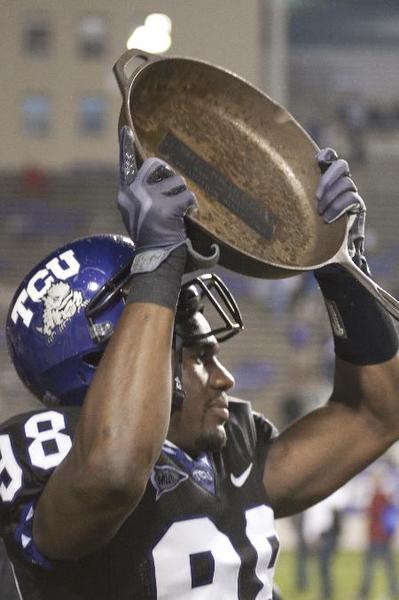 This marked TCU’s seventh consecutive home win against the Mustangs.

The Horned Frogs started the game slowly on offense. SMU was the first to make it onto the scoreboard with a 24-yard touchdown pass early in the second quarter from sophomore quarterback Bo Levi Mitchell to junior running back Shawnbrey McNeal.

“I made an emphasis last night and today during pre-game that we have been slow starters,” Head coach Gary Patterson said. “I didn’t think that we did defensively, I thought we did offensively.”

The defense came out strong with two sacks in the first quarter. The first was a combined effort by senior defensive end Jerry Hughes and junior defensive end Wayne Daniels. Senior Daryl Washington, linebacker, made the second sack on Mitchell.

“SMU runs a very high-powered offense, and we came in with the game plan to stop the pass,” Washington said.

After the rocky start, the TCU offense made a comeback in the second quarter with a touchdown by sophomore Antoine Hicks, a wide receiver.

With five minutes left in the first half, junior wide receiver Jeremy Kerley, returned a punt 71 yards for a touchdown against the Mustangs.

This was TCU’s first punt return for a touchdown since 2002 when Terran Williams made a 70-yard return against Cincinnati.

The success of the touchdown was also attributed to a block made by freshman linebacker Tanner Brock. Brock’s helmet flew off, and he made the block anyway, allowing Kerley to run the ball in for the touchdown.

Kerley said that he was thankful for Brock’s block and that it was an act of team loyalty.

Regarding Brock’s physical play, Patterson said, “That is something to get fired up about. We can be that physical, we just have to be smarter.”

At the end of the first half, TCU held a five-point lead over the Mustangs, due to a blocked kick by sophomore kicker Ross Evans, and a failed attempt at a two-point conversion.

The frogs put more points on the board in the third quarter with touchdown drives by tailbacks freshman Matthew Tucker and senior Joseph Turner.

Turner led the Horned Frogs in rushing yards with 79. He also leads active TCU players in career touchdowns, this being his 23rd.

TCU failed at another attempt for a two-point conversion, but Evans succeeded in his first point-after-touchdown of the game.

SMU made it back onto the board in the third as well with a touchdown pass from Mitchell to senior wide receiver Emmanuel Sanders.

Sanders led the Mustangs in receiving yards with 74, which marked the 29th touchdown catch of his career.

Junior strong safety Colin Jones recorded his first interception in the third quarter, and Hughes made another sack on SMU quarterback Mitchell.

The TCU offense scored in the fourth quarter as well with another touchdown by Hicks, on a 28-yard pass from junior quarterback Andy Dalton.

Washington made his second sack of the game on Mitchell.
Going into today’s game, a lot of emphasis was put on the 2005 loss to SMU after a win against the University of Oklahoma on the road.

“Our main focus coming in was to not let that happen again, so we came in and we executed,” Washington said.

The Horned Frog defense held the Mustangs to minus 16 yards rushing, and had four sacks on SMU’s quarterback, sophomore Bo Levi Mitchell.

Junior Alex Ibiloye, weak safety, led the defense in stops with nine, a career high. This made his second consecutive game with a career high in tackles.

Final: TCU 39-SMU 14: Daryl Washington seals the TCU victory with an interception off Bo Levi Mitchell. TCU would spend the rest of the time running out the clock.

8:21 4th: TCU 39 – SMU 14: After a 34-yard pass from junior quarterback Andy Dalton to junior wide receiver Curtis Clay, the Horned Frogs inched their way to the goal line. Sophomore fullback Luke Shivers received the one-yard pass from Dalton for the touchdown. The PAT by sophomore Ross Evans was good.

End of the 3rd:TCU 25-SMU 14: The Horned Frogs head into the fourth quarter with a lead over the Mustangs. TCU scored twice in the third off of an 11-yard run by freshman tailback Matthew Tucker, and a one-yard run by senior tailback Joseph Turner. They had one failed two-point conversion and the first successful PAT of the game by sophomore kicker Ross Evans. SMU made it back up on the board off a four-yard pass from Bo Levi Mitchell, quarterback, to wide receiver Emmanuel Sanders. SMU kicker Matt Syzmanski made the PAT.

End of the 1st half: TCU 12-SMU 7: The Horned Frogs end the first half with a lead over SMU. SMU made it on the board first with a touchdown off a screen pass from Mustangs quarterback Bo Levi Mitchell to wide receiver Shawnbrey McNeal. The PAT was good by kicker Matt Syzmanski. The first TCU touchdown was scored on a two-yard run by sophomore wide receiver Antonine Hicks. The second was made off a 71-yard punt return by junior wide receiver Jeremy Kerley. TCU’s PAT and attempted two-point conversion failed.

5:00: TCU 12-SMU 7: Junior wide receiver Jeremy Kerley scored on a 71-yard punt return. Freshman linebacker Tanner Brock made a block after losing his helmet. Brock went down on the play but left the field on his own. Junior Andy Dalton, quarterback, attempted a pass for a two-point conversion, but it fell incomplete.

End of first: TCU 0- SMU 0: At the end of the first quarter no one has made it onto the board. Junior Andy Dalton, quarterback, passed for 60 yards so far, compared to SMU quarterback Bo Levi Mitchell who passed for 104 yards. SMU missed a field goal and TCU’s running back, senior Ryan Christian is out of the game injured.