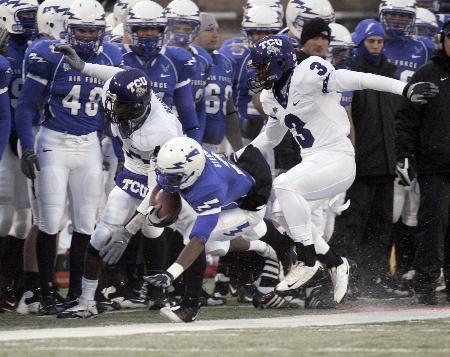 TCU advanced its undefeated season to 5-0 as the Frogs beat the Air Force Academy Falcons 20-17 in the coldest game TCU has played in its five year tenure in the Mountain West Conference.

Despite the 19 degree weather, with a wind chill of nine degrees, the Frogs put points on the board once every quarter on 393 total yards. The Frogs held the Falcons to 287 total yards, but 229 of the yards came via the ground. The Frogs also led the game in time of possession with 33 minutes and 55 seconds, chewing up much needed time for a Falcon comeback.

“It wasn’t like the last two weeks where we had a wet ball, where we played in downpour,” Frog head coach Gary Patterson said after the game. “The difference is that you have to stay in the ball game. Like I said, you’ve got to give Air Force credit. They did what they needed to do.”

TCU opened the scoring in the first with a one-yard run by senior halfback Joseph Turner. This run was Turner’s 24th of his career, which is the most among active players. Turner would finish the game with 72 yards on 18 carries. Halfback Ed Wesley and quarterback Andy Dalton were close behind with 47 yards and 38 yards, respectively.

“We’ve been able to get wins when the weather hasn’t been the best,” Dalton said. “Our team’s fought hard and we’ve gotten through it.”

The Frogs would add to the score in the second on a two-yard end around run from wide receiver Jeremy Kerley with 3:44 minutes left in the half. Kerley gained 26 yards on 3 receptions and 120 yards on punt and kick returns. Kerley’s longest return of the day was a 52-yarder in the third quarter.

The Falcons finally got the ball past the 50 yard line with less than two minutes remaining in the half and scored a touchdown with 1:19 minutes remaining off a pass from wide receiver Jonath Warzeka. Warzeka came around the end in motion, took the handoff then rocked back and fired a pass to a wide open Kevin Fogler in the end zone.

In the third, both teams would trade field goals, the first coming from Frog kicker Ross Evans from 38 yards out with 3:06 left to play in the quarter. Falcon kicker Erik Soderberg replied with a 28-yard field goal with 1:03 remaining in the third.

Evans would put away one more from 27 yards out in the fourth to cap off the Frogs scoring. The Falcons would make one more push with an eight-yard rushing touchdown by quarterback Connor Dietz. The Falcons capitalized on a Kerley fumble with just over three minutes remaining in the game.

The Falcon’s onside attempt was scooped up by the Frogs and Dalton took a knee three times to run out the clock.

“That is a tremendous football team,” Falcon head coach Troy Calhoun said after the game regarding the Frogs. “They came in here, played well, under some circumstances that were a probably a little bit different, at least in terms of the climate, and they handled it exceptionally well.”

Wide receiver Jimmy Young had an excellent game, gathering 113 yards on six receptions in his sixth career 100-yard game for the Frogs. With his performance, Young moved into 10th place among Frog receivers of all time in yards with 1,574. Young passed Quentily Harmon who finished his career with 1,557 yards.

“It felt good to come out and execute under these conditions,” Young said. “I just got my mind ready to be prepared for this weather and it didn’t have an effect on me.”

Despite the close score, Patterson was happy with the win and the way the Frogs fought to get it.

End of the third quarter: TCU 17, Air Force 10 – The Frogs controlled the ball for most of the third, ending their drive with a 38-yard field goal by Ross Evans. The Falcons came back for a quick three after a well executed reverse play. TCU has the ball to start the fourth in Falcon territory after a 52-yard return by Jeremy Kerley.

1:55 remaining in the third quarter: TCU 17, Air Force 10 – Falcon 28-yard field goal good by Erik Soderberg. Air Force was set up in the red zone by a reverse play that confused the Frog defense.

5:01 remaining in the third quarter: TCU 17, Air Force 7 – Ross Evans hits a 38-yard field goal after a long drive by TCU. It was Evans’ first attempt of the game.

Halftime: TCU 14, Air Force 7 – Air Force was held back in their own territory for the entire game except for the last drive of the half. It has been a back and forth defensive battle for the entire first half.

5:47 remaining in the second quarter: TCU 14, Air Force 0 – Jeremy Kerley runs around the end and takes the ball into the end zone on a two-yard rush. PAT was good by Evans.

4:21 remaining in first quarter: TCU 7, Air Force 0 – Joseph Turner runs in a one yard rush for the touchdown. PAT was good by Ross Evans.