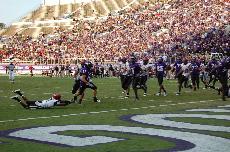 The Horned Frogs defense recovered from whatever whiplash they might have received from playing Oklahoma last week to dominate the San Diego State Aztecs’ offense Saturday night.

After allowing 436 yards of offense to the now-No. 1 Sooners last week, TCU allowed just 85 offensive yards to the Aztecs in the 41-7 victory.

“The defense did what they had to do,” head football coach Gary Patterson said. “Our kids were really disappointed that they didn’t get the shutout.”

The lone Aztec touchdown came after the Frogs’ only turnover, which gave them the ball at the two-yard line.

“We definitely wanted to stop them on that,” senior linebacker Jason Phillips said. “We rallied together, but we gave up a little seem down the right side and he just squeezed in there.”

Except for that play, the run defense continued to shine, holding the Aztecs to -13 yards on the ground. This was the second time on the season the Frogs have held an opponent to negative rushing yards. The SMU Mustangs had -8 rushing yards against TCU two weeks ago.

“Our defensive line has been playing tremendously,” Phillips said. “Jerry Hughes, James Vess, (Matt) Panfil and (Cody) Moore, they are all playing extremely well and that is giving me and (Robert) Henson enough time to move around and make some plays.”

The defense also stepped up and allowed San Diego State to convert a first down on just one third down play.

“We got them in a lot of long plays, which forced them to throw the ball and run gadget plays, which is what we wanted to do,” Phillips said.

On offense junior quarterback Marcus Jackson, who filled in for sophomore Andy Dalton, led the Horned Frogs. Dalton suffered a leg injury at the end of last week’s game against the Sooners.

Patterson said Dalton could have come in and thrown the ball tonight, but he decided to go with Jackson earlier this week. The coach expects Dalton to make a full recovery in time for next week’s game against Colorado State.

“I was pretty nervous,” Jackson said. “I don’t even know why. I guess because it was my first start this year. Coming in the second or third quarter is totally different compared to starting a game because when you start a game you want to go down and score a touchdown on the first drive just to set the tempo.”

The quarterback completed 10 of his 19 passes on the game for 115 yards and threw a touchdown pass to senior tight end Shae Reagan.

But where the junior really shined was on the ground. Jackson ran the ball 27 times for 131 yards and two scores, including one that he was hit in the air and made a helicopter-like motion as he fell into the end zone.

“I didn’t expect to run the ball 27 times,” Jackson said. “Coach told me that if nothing looks good down the field, you are a fast enough guy to go get three, four, five yards and I didn’t want to force anything downfield.”

As a team, the Horned Frogs ran the ball 71 times for 383 yards. Running the ball that much and that effectively helped the Frogs hold on to the ball for 43:29, while the Aztecs only had the ball for 16:31.

“We were very physical and you can tell that by the amount of possession time,” Patterson said. “It’s hard to lose a ball game, unless you get a punt blocked, if you control the ball for 43 minutes.”