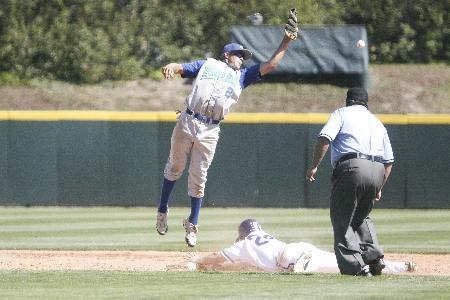 An ugly game turned into a close one Wednesday afternoon as the No. 16 Horned Frogs dispatched Texas A&M-Corpus Christi 10-7 despite early defensive woes for both teams.

The Horned Frogs started strong as starting pitcher Steven Maxwell struck out three in the first and Chris Ellington gave the team an early 2-0 lead with a single in the bottom of the inning.

The Islanders evened the score in the second when a base hit by Ernie Olivarez brought one man home and a throwing error by Taylor Featherston brought in another.

Featherston’s mistake was just the first of what turned into a stretch of horrendous defensive play by both teams. Before long the game turned into a re-enactment of the training montage in the film “Major League.” Twice in the second the Frogs failed to convert double plays.

The Islanders’ fielding was also lacking. An easy fly ball to left-center was dropped by an A&M-CC outfielder Jeramie Marek which advanced junior Matt Curry to second. At one point in the second inning, freshman centerfielder Aaron Schultz was walked and proceeded to steal second base while Islander catcher Justin Greiner stared at third. The ball never left his mitt.

The teams combined for six errors in the first three innings.

In the end, the Horned Frogs were just a little bit better at keeping those errors from turning into runs for the other team. By the end of the fourth inning, they led 8-2.

The Islanders would score again in the sixth when freshman pitcher Walker Kelly walked in a run.

Eventually the teams settled down and the Islanders fought back, scoring four runs in the sixth and another in the seventh.

The Islanders never took the lead, though, and a double by catcher Bryan Holaday in the eighth took the game to its final score of 10-7.

Head coach Jim Schlossnagle called the pace of the game “nightmarish,” but said he was just grateful his team won.

“We won the game,” Schlossnagle said. “Sometimes the way you have a really good season is you play really poorly and still win. The other team had more hits, we had more errors, and we still win. It doesn’t happen very often.”

The team sent six pitchers to the mound, but Schlossnagle said that decision was made to keep his rotation fresh as they will travel to California this weekend for a rematch against SDSU.

The Horned Frogs will return to Fort Worth for the start of seven straight home games beginning April 29 against Houston Baptist.