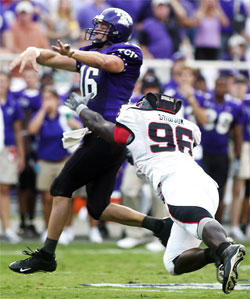 The Horned Frogs begin their defense of last season’s Mountain West Conference Championship in today’s game against the BYU Cougars.”I think they are a better football team overall than they were a year ago,” said head coach Gary Patterson.

TCU is coming off its first bye week since week 10 of the 2004 season.

“It’s a ‘get better’ week since we hadn’t had a bye week,” Patterson said.

Last year’s game versus BYU saw 101 total points scored in TCU’s 51-50 comeback win. The Frogs were down by 12 points with less than seven minutes left in the game.

The Frogs gave up 11 touchdown passes all last season and five of those came in the BYU game, Patterson said.

“They aren’t giving up as many points,” Patterson said.

While BYU’s 2-2 record does not look as good on paper as TCU’s, the Cougars don’t give up, Patterson said.

The Frogs are averaging 357.67 yards of total offense a game this season to BYU’s average of 442 offensive yards, which ranks 13th in the nation. The last year’s game had a combined total of 1,089 yards.

Most of those yards for BYU come through the air, which is averaging 317.5 passing yards a game – good enough for fourth in the nation. The majority of the Frogs’ offense comes from the ground, averaging 183 rushing yards a game.

Even though both teams have solid offenses, don’t expect the defensive lines to give anything away.

Both teams sport good pass defenses. BYU allows 221.25 passing yards a game, and the Frogs are allowing 238.33 yards a game through the air.

Stopping the run is how the Frogs make their living, allowing just 37 yards a game on the ground. This ranks them third in the nation behind Michigan and Texas. The Cougars allow 96 yards on the ground a game.

The Frogs have the edge when it comes to total defense. TCU has allowed just 275.33 yards, compared to BYU’s 317.25 yards allowed a game.

One of the keys to winning games is to be focused, Patterson said.

The Frogs enter the game still holding the nation’s longest winning streak, now at 13 games, but senior quarterback Jeff Ballard’s winning streak, which stands at 11, is still going. With a win against BYU, Ballard would tie “Slingin'” Sammy Baugh for second place behind Davey O’ Brien, who holds the all-time record with 14 consecutive wins.

Even with the two streaks, Patterson said conference games are when the season truly takes shape.

“The Baylor game and the Texas Tech game are good, because they are in-state rivalries, but it’s not anything like playing conference,” Patterson said.