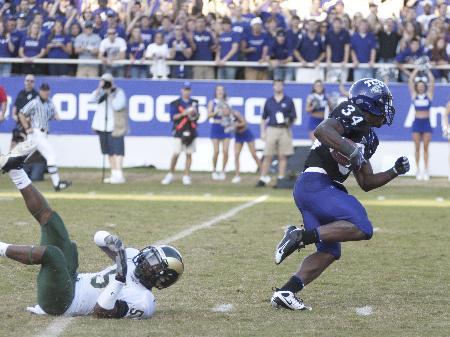 Dalton broke the 200 yard passing barrier for the third time this season, which included touchdown passes of 47 and 39 yards to junior wide receiver Curtis Clay and freshman running back Ed Wesley. Dalton also ran the ball six times for 42 yards.

Colorado State scored the first six points of the game on two field goals by sophomore kicker Ben DeLine. Rams Head Coach Steve Fairchild was not happy that his team stalled in the redzone.

“Anytime you take field goals instead of touchdowns, it is going to come back and bite you,” he said. “When it’s all said and done, they out-played us.”

Although TCU led 17-6 at halftime, the Rams were in control through one quarter. Senior defensive end Jerry Hughes said the defense was frustrated but not down on itself.

“I just told the whole defense ‘we cannot get discouraged over just one drive’,” Hughes said. “Once we got loose we started following through with our game-plan and everything seemed to just gel together.”

“(Kerley) made an unbelievable play . he’s that kind of athlete,” Dalton said. “He’s explosive and when the ball is in his hands he can do a lot of things.”

Head Coach Gary Patterson said the return energized the team on both sides of the ball.

“It always helps when you can start getting blood in the water,” Patterson said. “When good things are happening then we feed off of it.”

After the big passing plays from Dalton the ground game opened up for TCU, as it ran for 275 yards, distributed among 14 different ball carriers. Three of those 14 scored touchdowns: senior running back Joseph Turner, sophomore fullback Luke Shivers and sophomore wide receiver Antoine Hicks.

Hughes’ sacks gave him 25 in his career and broke a tie for third place on the TCU career list with Tommy Blake. Jacksonville Jaguars defensive end Bo Schobel is second on the list with 28.

The defense held Rams without a touchdown for the first time in 23 CSU games.

The BCS standings come out on Sunday and even Patterson hinted that he might take a peek.

“We’re all a little bit of a fan at heart, but we’re only going to be able to control what we can control,” Patterson said. “We’re going to go play and do the things we need to do and see how it all turns out.”

The Horned Frogs’ 6-0 start is their best since 2003 when they debuted at number 14 in the BCS standings.

Final: TCU 44 CSU 6: TCU would run the ball for most of the rest of the fourth quarter to run out the clock. Jerry Hughes forced a fumble to give the Frogs the ball with just under two minutes remaining. The Frogs were able to get several young running backs some carries as well as quarterback Yogi Gallegos a few snaps.

End 3rd quarter: TCU 38, CSU 6: With three third quarter touchdowns TCU pulled away after allowing the Rams to hang around during the early part of the game.

2:25 3rd quarter: TCU 38, CSU 6: The Frogs ramped up the offense, as Antoine Hicks scored on a three yard run. That makes three straight possessions with a touchdown for TCU. All three drives have taken less than three minutes off the clock. PAT made by Evans.

5:00 3rd quarter: TCU 31, CSU 6: Dalton again connected down the seam, this time to redshirt freshman running back Ed Wesley for a 39 yard touchdown. The five play drive took just 1:42. PAT made by Evans after a five yard false start penalty.

8:52 3rd quarter: TCU 24, CSU 6: Blown coverage on the part of the Rams left Curtis Clay wide open down the middle of the field and Andy Dalton hit him with a 40 yard touchdown pass. PAT made by Evans.

Halftime: TCU 17, CSU 6: Colorado State took an early 6-0 lead on two Ben Deline field goals, as the TCU offense was sluggish at the start. The Horned Frogs picked it up though, with Jeremy Kerley providing the big boosts. He caught a 22 yard pass from Dalton to set up Joseph Turner’s touchdown and Kerley also returned a punt 69 yards for a score.

0:49 2nd quarter: TCU 17, CSU 6: Jeremy Kerley weaved through the Colorado State coverage team to take a Rams punt 69 yards to the house. PAT made by Evans.

3:08 2nd quarter: TCU 10, CSU 6: Joseph Turner rumbled into the endzone from two yards out for his seventh touchdown of the season. PAT good by Evans.

End 1st quarter: TCU 0, CSU 6: The Frogs have the ball in Colorado State territory and picked up their first first down of the contest.

7:38 1st quarter: TCU 0, CSU 3: The Frogs stopped Colorado State in the red zone as the Rams settled for a 31 yard field goal off the foot of Ben Deline.