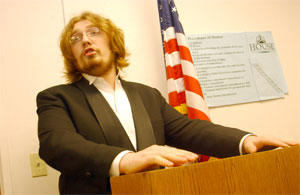 A resolution was passed to support endeavors to create an academic honor code during Tuesday’s House of Student Representatives meeting.The resolution enables the Student Government Association to support the research and drafting of an honor code by a group of students, faculty and members of the administration.

The resolution states that the honor code would “educate all students on the do’s and don’ts of academic misconduct.”

The group will meet with SGA advisers on a biweekly basis for one semester to update advisers on the progression of the resolution.

Ambika Sharma, SGA administrative clerk, and Justin Brown, School of Music representative, were both authors of the resolution.

“The reason we wrote this is to show the Faculty Senate that this does have support by the students in being something that needs to be looked into,” Brown said. “I think in general, [Faculty Senate members] have the perception that the students don’t want [the honor code] and that we all want to cheat.”

When the previous resolution was passed, the Academic Affairs chairwoman conducted a survey that showed 93 percent of students were in favor of an honor code, Sharma said.

The new honor code will borrow its structure from the previous honor code, Brown said.

“We are not saying we are going to throw away the old honor code, but we want to do our own research based on the current dynamic,” he said.

Ryan Johnson, SGA communications chairman, said the process of building the honor code will take a lot of work, but if everything goes well, it could go into effect as early as next semester.