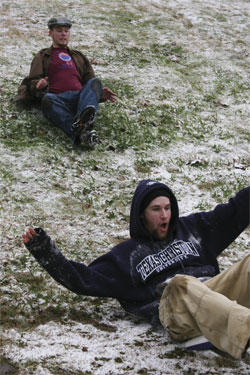 Campus was closed Thursday because of icy roads and poor weather conditions, said Tracy Syler-Jones, assistant vice-chancellor for marketing and communication in an e-mail. She said Provost Nowell Donovan is in charge of cancelling classes and that when university officials checked conditions early Thursday morning, the roads were clear and weather was good, but conditions were quickly deteriorating, she said.

There are about 100 classes or labs that meet only on Thursday, according to the class search on my.tcu.edu.

Provost Nowell Donovan said it would be difficult to reschedule these classes and that each professor will have to decide what he or she will do individually.

“The only realistic way of making these classes up would be to cancel dead days,” he said, “and we can’t really do that.”

Donovan, who teaches a graduate class on Thursday night, said he will e-mail his small class to try and find a time to meet, but he said he would think for a larger class it would be a difficult things to do.

“I think it’s going to require a lot of imagination,” he said.

Campus tree remains to be lit

The Holiday Tree Lighting, which was scheduled for 6:45 p.m. Thursday, will be rescheduled some time next week before dead days begin, said Kristen Chapman, Programming Council director of special events.

The concert, which was scheduled for after the tree lighting, was moved up and began at 6:45 p.m. Thursday in the Student Center Lounge.

Chapman said the concert, featuring Tyler Hilton, who played Elvis in “Walk the Line” and appeared on the television show “One Tree Hill,” was an acoustic set and said she thought the Student Center would provide an intimate setting.

“It’s just a matter of adapting,” Chapman said. “You can’t control the weather.”

She said PC members are still deciding whether to hold the Holiday Craft Fair Friday.

The game, which was supposed to tip off at 7 p.m. Thursday in the Daniel-Meyer Coliseum, will take place today at 7 p.m., said Tamara Metcalfe, assistant director of athletics media relations.

Both schools have to agree to reschedule the game, but the decision was probably reached because SMU is going through the same weather conditions we are, she said.

As for Saturday’s football game against the Air Force Falcons, Metcalfe said everything will continue as planned and the weather “won’t affect anything at all.”

Some campus amenities trek on

Though Dining Services and the University Recreation Center made some changes Thursday, both were open to students with limited hours.

Craig Allen, director of Residential Services, said he and Rick Flores, general manager of TCU Dining Services, determined what hours Dining Services would be open Thursday morning based on the number of staff available.

The Main, Edens, NRG in the Rec Center and Frog Bytes were all open and Sub Connection, Bistro Burnett, Deco Deli, Pond St. Grill and the catering offices were closed Thursday.

“The toughest one to make a decision on is Pond St. for us,” he said. “We know that we want students out in Worth Hills to be able to eat.”

However, he said shuttles were running throughout the day and students in Worth Hills could use these to get to the main campus dining facilities.

The Rec Center closed at 9 p.m., three hours earlier than normal, said Sarah Long, a senior accounting major who works at the Rec Center. However, she said, the Rec Center had a full staff Thursday and plans to return to normal hours today.

Hall directors and resident assistants are considered essential staff and were available all day Thursday, Allen said. And while he said they may not have had regular office hours, all were available in their buildings.

He said their main goal is to, “make sure they have all services needed for students,” and that there are not usually any special issues that come up with students on snow days.

Froggie Five-0 puts on the breaks

Froggie Five-0 was not operating Thursday because of concern for the student drivers’ safety, said Lt. Abad Ramiro for TCU Police.

The TCU Police, however, operated with a full staff and were open 24-hours-a-day as usual, Ramiro said.

He said they had not been alerted of any problems due to the ice as of Thursday afternoon but that people are out on the roads that probably shouldn’t be. He said TCU Police advised people to stay off the roads, but he understands people will not necessarily abide by this advice.