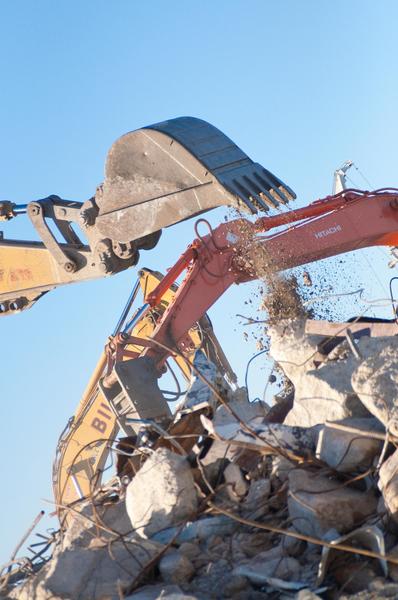 After the Dec. 5 implosion of the football stadium's west grandstand, crews began clearing away the rubble to begin the $105 million renovation of TCU's Amon G. Carter Stadium.

Ross Bailey, associate athletics director for operations, said the clean-up of more than 500 truckloads of debris should be completed in one more week.

"We got our own little force of Tonka toys out there, all with a different function," Bailey said.

Bailey said more than 90 percent of the debris from the implosion would be recycled into other projects worked on by the construction company.

Del Conte said he was surprised at the progress of the clean-up in such a short amount of time and that he was also proud that much of the debris would be recycled.

Work also began on the north endzone, with construction crews raising piers to make way for the upper deck that would provide an additional 5,000 seats Bailey said.

Del Conte said the north endzone is "going vertical," referring to the piers that would support the expanded seating.

Davis Babb, associate athletics director for development, said the north endzone will also have new concession stands, restrooms, and a new scoreboard scheduled to be ready for the 2011 season. The existing scoreboard in the north endzone would be moved into the southeast corner of the stadium.

Del Conte said the entire renovation was on schedule so far.

"The implosion was great," Del Conte said. "Contractors are fabulous, [and] barring any weather right now, we are going great."

Babb said because construction would continue throughout the 2011 season, fans could expect a temporary decrease in parking and seating. He said he felt fans would still have a good experience, though.

"Fans can expect a more temporary nature for 2011," Babb said. "Fans will have easy access in and out."

Parking lots one and two near the stadium would be inaccessible in the 2011 season, and Babb said arrangements were still being made to find other lots for game day parking.

The actual timeline of the renovation would be difficult to nail down, but as long as there are no unforeseen delays, Del Conte said crews would continue working.

The complete renovation of the stadium is scheduled to be finished for the home opener against Oklahoma in September 2012. The stadium will be fully equipped with new restrooms, concession stands, suites and expanded seating.