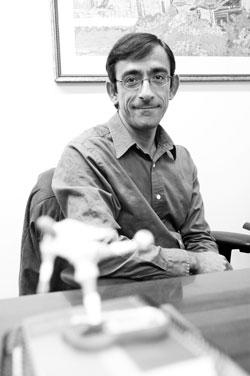 Teaching offers one history professor a chance to get a change of scenery.”One of the best things is to be a teacher,” said history professor Juan Sola-Corbacho. “In an office you see only the same people. That’s boring.”

As a teacher, you get to meet so many different people each semester, Sola-Corbacho said. He believes the best way to teach is to think of each student as a universe and as a human being. It is only when you accept the differences between people that you are able to help them learn and be at their level, he said.

“I love to teach freedom, democracy and other ideas you can find only in history,” he said.

As a teacher, Sola-Corbacho’s favorite thing is seeing his students grow and change over the semester. He said he tries to either come down to his students’ level or help them come up to his level of thinking.

Ashley House, a junior history major, has had Sola-Corbacho as a teacher every semester she has been at TCU and considers him her favorite professor and a friend.

“My adviser calls me a ‘Sola groupie,'” House said. “He’s just that awesome.”

She describes his lectures as lively and funny and some of the best she has heard at TCU.

“He has always dropped whatever he was working on to invite me into his office to give me advice on grad school, travel, family and even cold remedies,” House said.

Sola-Corbacho grew up in Madrid, Spain. He said he decided to study history after having a wonderful art history professor in high school. In Spain, it is mandatory to take two years of art history classes.

“He was my favorite professor ever. I just loved his classes,” Sola-Corbacho said.

He went to college in Madrid and majored in European and Latin American history and minored in art history and geography. Colleges in Spain have bars on campus, where they serve liquor, but not beer, he said. They are large and always full of students.

“The food there (at the bars) was so good and so cheap. It was about $4 for two plates, dessert and coffee,” Sola-Corbacho said.

The college’s history library, he said, is larger than the TCU library and the third largest library in Madrid. The class sizes were small, consisting of only eight students. When he went to school, classes lasted an entire year. By the end of the school year, students either had a really good relationship with their professors or hated them, he said. He observed after coming to the United States that the relationships he had in Spain with his professors were much closer than the relationships students have with their professors here.

“She went there (from the United States) to try to find the information she needed to finish her dissertation,” he said. “I was there to finish mine. A common friend invited us to celebrate his birthday. It was then we met each other.”

On their honeymoon in northern Spain, Sola-Corbacho said he hiked down a cliff to the beach where he found a small stone. He brought it to the United States and, after eight years, still cherishes it as his favorite memento.

After getting married, Sola-Corbacho and Campbell decided they would move where one of them found a job first. Because it was easier to find a job in the United States, they moved here. One of Sola-Corbacho’s friends who finished his dissertation around the same time as him just recently found a job in Spain after eight years.

He did not. He taught at Tarrant County College until TCU asked him to come teach for them.

With a huge smile, Sola-Corbacho said, “I could not imagine my life without it (teaching).