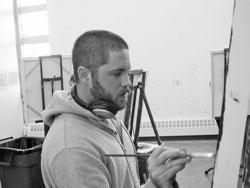 Art provides one student the freedom to express his thoughts on world issues and allows people to perceive the world differently through the eyes of an artist.”I want other people to be able to see the world the way I do,” said Scott Meyer, a junior studio art and environmental science major.

Meyer, a Jacksonville, Fla., native, describes himself as “always heading toward the horizon.” His inspiration for pieces comes from the ocean and the experiences he gained from his recent travels abroad.

In the spring and summer of 2007, Meyer traveled around the world. Meyer conducted four months of research in South Caicos, a small Caribbean island with a community of about 1,200 people. His research on recycling aluminum glass led to a recycling program that was implemented after his departure from the island, he said.

Hungary, Italy, Germany and Switzerland are among the different countries Meyer visited during his semester abroad with the TCU art department. The knowledge he acquired from the Hungarians and their culture encouraged him to take big strides in his drawing ability, Meyer said.

“In Budapest, I was able to study figure drawing from a professor who studied under the author of the traditional figure drawing book that is still used today,” Meyer said.

Meyer said the original themes throughout his artwork pertain to his past and his passion for nature. After traveling parts of the world, Meyer incorporates his original themes in his pieces, but also includes his political views and emotions toward the current status of the world.

Paris Barnett, a senior studio art major, said, “The innovative and diverse ideas inside Scott’s mind make him an exceptional artist, because he uses his artistic talent to speak original thoughts through powerful pieces.”

Meyer said he often criticizes his own artwork, but his ability to remain relaxed when he makes art differentiates himself from other artists.

TCU art classes require multiple hours of work in the studios outside of regular class time. Meyer said art at TCU demands and consumes more time than most other majors, but even as a double major, he still makes time for an outside job.

Meyer has been creating a stream of artwork outside of class along with his pieces created in class. He sells personal artwork and creates original paintings for individual buyers. Meyer said his current work of art is an expressive painting of the Texas coastline and its personal impact on him.

Meyer plans to open the public’s eyes and make statements through multimedia. Meyer said he plans to continue to create visual art, produce documentary films and travel around the world after he graduates.

Barnett described Meyer as a bona fide artist and individual.

“Through art, Scott wants to give people the ideas and messages he believes could eventually improve different aspects of the world,” Barnett said.