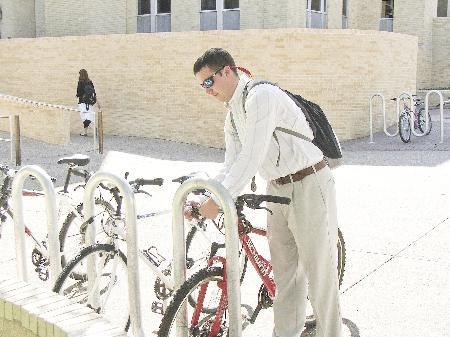 Hollis Dyer, superintendent of maintenance at Physical Plant, said there were reasonable explanations behind the absent bike racks, many of which were placed near their intended locations because of the inability to physically make room for them in walkways, Dyer said.

“SGA had asked that a rack be put at the top of the steps leading down to the rose garden in Worth Hills; however, the rack either had to be put in the grass or block the steps so the rack was put at the bottom right hand side of the stairs,” Dyer said.

Other racks’ installation will be delayed by construction, she said.

“The area in front of Reed Hall as well as the area near the Miller Speech and Hearing Clinic are still partially under construction so we will wait until it is finished in order to properly install the racks in the most useful area,” Dyer said.

A bill that allocated $4,368 to add additional bike racks on campus was passed last semester because there were frequent complaints about the overcrowding of bike racks as well as the absence of bike racks on some parts of campus, said Matt Dietrichson, student body vice president and sophomore political science major.

Dietrichson said representatives had expected the racks to be in position.

“The Campus Advancement Committee decided on those spots based on student requests and paid for all of the racks, so when we realized they weren’t all there this semester, we were obviously a little perturbed,” he said.

Lindsey Wilson, a sophomore education major and College of Education representative, said she was responsible for verifying that the bike racks were in their designated areas. When she went to look for them the week before Spring Break, many were out of place or missing, she said.

Four out of 10 sets of bike racks made it to their intended areas, Dietrichson said. Physical Plant was unable to add new bike racks in Worth Hills between the Pi Kappa Phi, Sigma Phi Epsilon and Delta Gamma houses because they had run out of bike racks, he said.

Dyer said Physical Plant is working on getting additional racks.

“We have ordered 20 more racks, and they will be arriving within two to three weeks,” Dyer said.