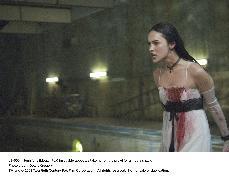 The girl of many guys’ dreams is about to become their worst nightmare in the latest film by “Juno” writer Diablo Cody.

Coming off the highly successful “Transformers” sequel this summer, Megan Fox has stepped into a lead role she can sink her teeth into as a deadly seductress in the teen horror flick “Jennifer’s Body.”

Fox plays the popular Jennifer, who goes from cheerleader by day to demon-possessed serial killer by night. When she starts killing off male classmates who think they have a chance with her, it’s up to her best friend Needy to stop her. Awkward and nerdy, Needy is played by Amanda Seyfried, another actress who came off a popular summer movie with last year’s “Mamma Mia!”

Writer Cody, who went from stripper to memoirist to Academy Award winner for best original screenplay for “Juno”, followed up her win with another collaboration with director Jason Reitman, who has returned to produce “Jennifer’s Body” while Karyn Kusama (“Girlfight,” “Aeon Flux”) is at the director’s helm.

With a supporting cast that includes “Strangers with Candy” alumna Amy Sedaris and “Juno” actor J.K. Simmons, the film promises a dark sense of humor like “Heathers,” the original high school comedy with a body count. Think “Mean Girls” with a little of the ’80s teen horror comedy “Fright Night.” It won’t all be blood and belly laughs, though; Megan Fox fans (that is to say most men) will probably come out in droves to see her slice and dice her adolescent victims.

It might make you want to revisit your high school years. Maybe not.