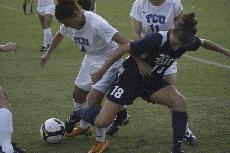 The soccer team remains undefeated after shutting out East Tennessee State University on Sunday in a 7-0 victory.

Junior forward Lizzy Karoly began the scoring, netting the first three goals of the game within the first 15 minutes of the first half. Karoly collected her hat trick with two goals coming from breakaways. The third was a sliding shot from more than 30 yards from the goal which found the top corner of the net.

“We knew if we got out early and tried to get them on their heels, and the kids did that with three goals in the first 20 minutes, it’s tough to recover,” head coach Dan Abdalla said.

Redshirt freshman Kaylie Garcia found twine in the first half also. The goal came off a return pass from freshman midfielder Chelsey Wilgenburg that threaded the needle between defenders deep in the penalty box.

ETSU’s only chance of the first half came on a disallowed goal in the eleventh minute. Sophomore goalkeeper Kelsey Walters stopped a hard shot from the outside, leaving the rebound at the goal mouth. ETSU finished the loose ball but the play was immediately negated by an offsides call.

In the second half, TCU found the net three more times, beginning just over a minute after halftime. Freshman forward and scoring leader Jordan Calhoun put away a shot with help from senior defender Caroline Starns.

Starns then scored off a pass from freshman midfielder Katie Runyon. Runyon made the most of her time on the field, fighting for the ball and hustling, Karoly said.

Junor midfielder Michelle Nguyen finished the scoring, collecting her first goal of the season off a chip shot from outside the box that sailed over the head of the ETSU keeper.

Abdalla was able to give playing time to a few non-starters in the second half, most notably senior midfielder Courtney Johnson and sophomore goalie Kadye Bowman. Both Johnson and Bowman have been sidelined from injuries for long periods of time.

“It was good to see CoJo [Johnson] and Bowman get some playing time because they’ve been coming back from injuries for over a year,” Karoly said. “It was great to see all their rehab work pay off.”