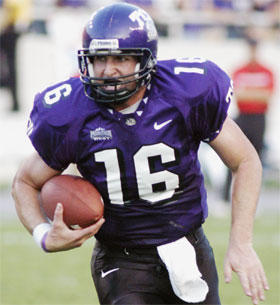 The Horned Frog football team trailed the Brigham Young Cougars by 22 points late in the third quarter and had just lost its starting quarterback to injury.No worries. The backup quarterback had been in this situation before.

As a junior in high school, TCU junior quarterback Jeff Ballard was not the starter. He had competed for the starting job during the off-season but was unable to win it. It was now the fourth game of the season, and his high school football team, Friendswood, was trailing. The starter does not get hurt, but rather is replaced by Ballard. Ballard rallies the team – but the comeback falls short and Friendswood loses by one point. Ballard remains the starter for the rest of season and throughout his senior year.

When senior Tye Gunn, TCU’s starting quarterback, got injured in the BYU game, Ballard said his immediate thoughts were with Gunn and the length of time he was going to be out.

“For the most part, I was not nervous,” Ballard said. “For the past four years I have been practicing, so I felt comfortable with the system. The coaches also made it easy because we ran the ball the first five to ten plays.”

“When Tye went down, I knew Ballard would do a great job,” Rodgers said.

Ballard has always been prepared to seize the opportunities he receives.

“I encouraged Jeff to be prepared mentally and physically if the opportunity ever arrived,” Jeff’s father, Kent, said.

Ballard’s father said Jeff has been playing football since he was in the seventh grade but was also an all-around athlete growing up. Ballard’s father also said Jeff became one of the top players in the greater Houston area.

Ballard was recruited by Iowa State, Kansas and Arizona State, according to gofrogs.com, but he chose to attend TCU.

“TCU was close to home,” Ballard said. “I also liked the campus, the atmosphere, the coaching staff and the players.”

Ballard said there were times when he was discouraged by the lack of playing time and the idea of transferring came up in the back of his mind.

“The coaches told me to just stick it out,” Ballard said. “I felt that it was in my best interest to stay here and get a degree.”

Ballard got his opportunity to play in the BYU game when Gunn got injured. He finished the game completing eight of 12 passes for 150 yards and two touchdowns, and in contrast to Ballard’s game in high school, his team won by one point.

“Jeff Ballard has a lot of poise,” TCU quarterbacks coach Dick Winder said. “He does not let mistakes get to him. When a play is over, it is over.”

Ballard’s father said he does not know where Jeff got his poise.

“Poise is developed over time,” Ballard’s father said. “Jeff is not real excitable and does not show a lot of emotion. He is very calm and relaxed.”

“Jeff has great composure,” Rodgers said. “He is real calm and very intelligent. He makes good decisions and knows the plays.”

Ballard said his poise comes from practice and Coach Winder

“Coach Winder is always yelling, getting under my skin but in an encouraging way,” Ballard said.

Both Coach Winder and Ballard’s father said Ballard has earned the respect of his teammates.

“I have always stressed to Jeff and all of my children to be leaders and not followers,” Ballard’s father said. “Jeff is not a rah-rah type guy. He leads by example.”

“I like to scramble,” Ballard said. “I liked to scramble a lot in high school as well.”

“Jeff has not played enough,” Coach Winder said. “It is hard to improve unless you actually play. The more he plays, the better he gets.”

Ballard began the season as Tye Gunn’s backup and there is always the chance of Gunn returning.

“The starter does not lose his position just because he get hurts,” Coach Winder said.

For now, Ballard is TCU’s starting quarterback and has embraced his opportunity to play as well as lead the offense.

“It is my job to put the team in position to win games and score points,” Ballard said.