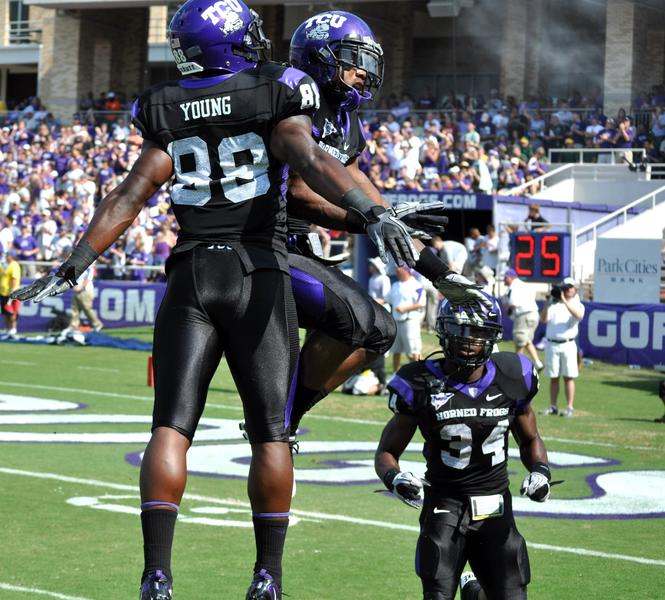 The Battle for the Iron Skillet resumes on Friday night in Dallas. The Mustangs are on the rise after snapping a 17-game losing streak against BCS opponents after beating Washington State 35-21 last weekend. The Horned Frogs are coming off a 45-10 rout of Baylor and are looking to extend their regular season win streak to 17. The last ranked team the Mustangs beat was TCU in 2005.

What to expect when the Horned Frogs are on offense

Andy Dalton leads one of the most prolific offenses in college football this year. TCU’s offense is ranked 14th in the nation and average 487 yards per game. SMU’s young defense will have its hands full trying to contain the dual threat of running backs Ed Wesley and Matthew Tucker who have combined to rush for 545 yards in three games this season. SMU is 23rd in the country in rushing defense but has yet to face an opponent like TCU. SMU’s defense line should be at a major disadvantage against the experienced Horned Frog offensive line led by seniors Marcus Cannon and Jake Kirkpatrick. If TCU can run the ball effectively it should be a long day for Mustang fans. SMU may have to bring its safeties up to try and help contain TCU’s rushing attack.

The strong running game should open up play action for quarterback Andy Dalton. Dalton completed 74 percent of his passes and is spreading the ball across the field efficiently. Three TCU receivers, Jeremy Kerley, Bart Johnson and Josh Boyce, have already passed 100 receiving yards this season. SMU must pressure Dalton to have any chance at stopping the Horned Frog passing attack. Look for SMU players to try and make Dalton uncomfortable by blitzing early and often. The Mustangs rely on blitzing to generate sacks 8212; the defensive line has only three of ten sacks this year. SMU will need to generate turnovers in order to compete on the field. The SMU defense has only one interception this season. If the safeties are up in the box trying to contain the Horned Frog running game, Dalton should have a big day.

What to expect when the Horned Frogs are on defense

TCU defense is ranked fourth, allowing just 222.7 yards per game. The key match-up will be in the trenches, Wayne Daniels leads the TCU defensive line with 3.5 sacks this season and could have a big day on Friday. The SMU offensive line is fairly average and will have trouble dealing with the speed rush of TCU. SMU quarterback Kyle Padron will attempt to distribute the ball to a trio of talented receivers led by senior Aldrick Robinson who had three touchdowns against Washington State last week. Look for TCU to pressure Pardon into making some ill-advised throws.

TCU has allowed 88 yards per game on the ground this year. If SMU wants to keep up with TCU, they will have to run the ball effectively. Sophomore running back Zach Line is a big bruising back and SMU will have to feed him the ball early and often so they can control the clock. This poses a problem for the Mustangs, if they fall behind early they may have to abandon the running game and this will force Padron to throw the ball over the field to try and come back. This will give TCU the edge on defense.

Jeremy Kerley is one of the most electric punt returners in all of college football. TCU is averaging 17.3 yards per punt return, ninth best in the country. SMU does not have enough athletes to keep up with the speed of Kerley, so look for him to have a big day. The Mustangs are only averaging 3.6 yards per return, TCU should have a big advantage when it comes to field position.

Allen Kellogg is a sophomore journalism major from Alexandria, VA.