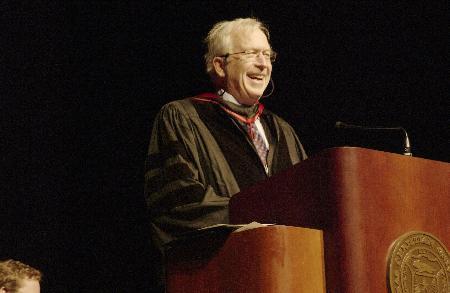 Simon Blackburn, a professor of philosophy at the University of Cambridge, addressed about 150 students and faculty at the annual honors event, which concluded a week of senior honors presentations. Blackburn also gave the keynote address at “Nietzsche and the Philosophical Life,” a symposium that began Thursday.

Richard Galvin, professor of philosophy and the holder of the Betty S. Wright Chair in Applied Ethics, introduced Blackburn as a prominent philosopher and prolific author of books such as “Plato’s Republic: A Biography” and “Truth: A Guide for the Perplexed.”

“I think he wrote that one for me,” Galvin said to thunderous laughter.

Blackburn described 19th century German philosopher Friedrich Nietzsche as a maverick thinker who embodied the inquiring spirit of philosophy as a critic of Christianity and contemporary culture.

“He was utterly fearless,” Blackburn said. “He pursued his furious campaigns in complete independence, contemptuous of praise and criticism alike.”

Blackburn said knowledge results from the combination of scientific inquiry and the confluence of political, social, economic and cultural forces, which he said will enable new generations to understand the achievements of the past.

“Hence it reminds us of the burden that we academics bear as we try not only to increase those achievements but even to protect the ones that we have got,” he said.

Nowell Donovan, provost and vice chancellor for academic affairs, introduced more than 30 inductees to Phi Beta Kappa, a prestigious undergraduate honor society. Membership to the society is through invitation.

The event reached its climax with the announcement of the recipient of the 2008 Honors Faculty Recognition Award, Blaise Ferrandino, associate professor of music theory and composition, who accepted the award to a standing ovation.

Jeremy Pessoa, a senior English major, said he enjoyed the keynote address despite not having an interest in philosophy. He said convocation is a tradition he will remember after he graduates.

“It’s an honor to wear a gown and march with the faculty,” he said.