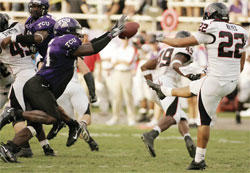 In front of a sold-out crowd numbering 45,647, the Horned Frogs downed the Texas Tech Red Raiders 12-3 extending their nation-leading winning streak to 13 games.Junior place-kicker Chris Manfredini, who provided the Frogs with 12 points going 4-4 on field goal attempts and extended his perfect field goal career at TCU, said he still gets nervous before every kick and attributes that to his strong record.

“The nervousness is what makes me a good kicker,” Manfredini said. “I also have the confidence to overcome it, but you need both. You never want to be too confident and then go in there being very lackadaisical and laid back.”

Although TCU’s offense was unable to put the ball in the end zone, the defense did its part by holding the nation’s No. 2 passing and No. 19 scoring offense to just three points – a dilemma many sports analysts thought the Frogs would be unable to solve.

The Frogs’ defensive secondary included two freshmen, right cornerback Rafael Priest and left cornerback Nick Sanders, who rose to the challenge of defending against the Red Raiders – a fact that brings a smile to the face of senior safety Marvin White.

“They did good to stay with the big-time ballgame like this,” White said. “They held their composure, and they played within themselves. They weren’t trying to force anything. They played well for being redshirt freshmen.”

Wearing bracelets with the words “make it personal”, the Frogs did just that, taking revenge for the 2004 70-35 loss in Lubbock.

“We gave up 70 points two years ago,” Patterson said. “We’ve been waiting for this one for a long time.”

With the win, the Frogs extended two other winning streaks as well. Against Big 12 opponents, TCU has won their last four meetings, and senior quarterback Jeff Ballard’s winning streak as a starter now stands at 11 games, which ties 1938 Heisman Trophy winner Davey O’ Brien and is one game shy of Sammy Baugh’s all-time record.

“The team streak is really what’s important to me,” Ballard said. “It doesn’t matter if the score is 12-3 or 3-2. As long as we are winning, that’s all we care about.”

The Horned Frogs came into this game ranked No. 20 in both the USA Today Coaches Poll and the Associated Press Media Poll, and this win has already propelled the Frogs up the national rankings. As of Monday, the Frogs have moved up to No. 15 in the USA Today Poll and No. 16 in the AP Poll, which are jumps that emphasize the newfound respect the Frogs are getting from pollsters and the respect Patterson desperately wants for his team.

“People have been underselling our kids for years,” Patterson said. “All anyone wants to talk about is the Big 12. We’re not the Big 12; we’re just a Texas team that plays with Texas players. I have a lot of respect for Mike Leach and his staff and the job they do. The bottom line is I’d like to get a little bit here at TCU.”

TCU will now have about two weeks to prepare for their first Mountain West Conference game against the 1-2 BYU Cougars at Amon Carter Stadium.