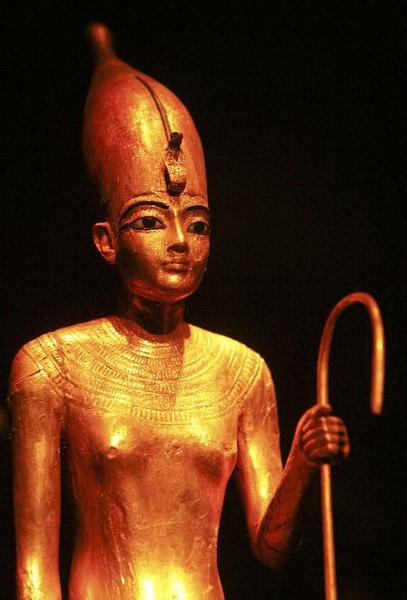 Big Tex is no longer the only legendary icon in town; the boy king, Tutankhamun, has arrived.

The Dallas Museum of Art will host “Tutankhamun and the Golden Age of the Pharaohs” beginning today until May 17, 2009. After its Dallas tour, Tut will make two final U.S. stops in Atlanta and Indianapolis.

“We hope to draw one million people or more,” said Bonnie Pitman, the Eugene McDermott Director at the Dallas Museum of Art. “In the great Dallas way, we want to do better than everybody else.”

King Tut’s first voyage to the U.S. in 1976, marked the 55th anniversary of Howard Carter’s discovery of Tut’s tomb and 55 artifacts, according to the exhibit’s Web site. The original tour lasted three years and visited six museums for four months each.

Minor damage to an artifact was the reason for the almost 30-year gap between tours.

Although the 1970s exhibit, “Treasures of Tutankhamun,” focused on the tomb’s discovery and excavation, the current exhibit focuses on the story of Tut’s short life and integrates the cultural context of his time into the presentation of the artifacts, according to the exhibit’s Web site.

Each of the 11 rooms of the exhibit provide contextual information about the politics, art, religion and culture of Tut’s time, according to the exhibit’s Web site.

Tutankhamun became king at about age 9 and ruled until his sudden death at about 19 in 1323 B.C.. Tut’s significance lies within his noted attempts to restore tradition into the Egyptian culture that was lost during previous rule, according to the displays inside the exhibit.

There are more than 130 artifacts exhibited, all more than 3,000 years old, from Tut’s tomb, the Valley of the Kings and other ancient Egyptian sites dating from 1555 to 1305 B.C. The artifacts include treasures from other royalty and members of the elite classes from the 18th Dynasty of which Tut was the last reigning king, according to the Dallas Museum of Art’s Web site.

“It’s not just wealth, it really is artistry,” said Anne Bromberg, Cecil and Ida Green Curator of Ancient and Asian Art at the Dallas Museum of Art. “In the perfection of the inlay, you can see just how great the artist was.”

The most notable pieces on exhibit are four artifacts that have never traveled outside of Egypt. They include: “Pectoral with Solar/Lunar Emblems and Scarab”, “Bracelet with Scarab Clasp” and two “Nested Fetus Coffins”.

A notable of the 1970s exhibit, the “Golden Mask” was deemed too fragile to move and is staying at its home in Cairo, Egypt. Tut’s mummy and coffin will stay in the Valley of the Kings during the tour where it has remained since its discovery.

Several events outside of the main exhibit include a grand opening party Saturday and Sunday, which involves performances, art demonstrations and family activities. There will also be lectures, films, classes and workshops taking place throughout the exhibit’s stay in Dallas.

Both “Tutankhamun and the Golden Age of the Pharaohs” exhibit tickets and general museum tickets will include the opening party activities. However, Tut exhibit tickets must be purchased in advance.

“You go to see a movie now and you pay $20 for a movie that you forget after five minutes,” said Zahi Hawass, secretary general of Egypt’s Supreme Council of Antiquities. “But you come to an exhibit like this and you learn about the history of Egypt and you see the magic of these wonders.”

Mark Thistlethwaite, the Kay and Velma Kimbell Chair of Art History, said students will benefit from seeing the exhibit.

“We always encourage students to go to exhibitions, museums and galleries because you get to see works in person, and you’re not looking at a reproduction,” Thistlethwaite said.