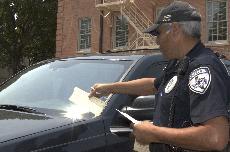 Looking for a parking space on campus? No problem. Just make your way to the commuter parking lots by 8 a.m. before they fill up. Don’t have class until 9 a.m.? No worries there either. There are always the parking lots by the football stadium.

The parking situation on campus has long been a topic of complaint among those who frequent the lots, but this semester it has reached a new level of hair-pulling frustration. Finding a convenient spot close to the building you need has become nearly impossible. Even the overflow lot on Sandage Avenue has been full at peak times.

When you show up to a parking lot 30 minutes early for the sole purpose of finding a space and you still leave empty handed and arrive late to class, it becomes very clear that there’s a problem.

When the lack of parking begins to interfere with academics, something has to change.

Just as the university made an adjustment when it ran out of housing for freshmen, it should also make adjustments to the campus parking lots. Think of parking spaces as dorm rooms for those who live off campus.

It doesn’t matter if the campus has more than 8,000 parking spots when the majority of them are located by the football stadium on the opposite side of campus. Students pay way too much money at this university to be forced to work themselves into a nervous wreck looking for a parking spot before their days even begin.

News editor Michael Carroll for the editorial board.