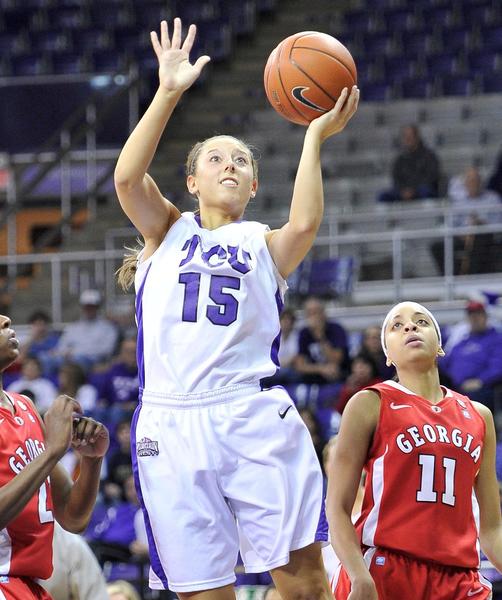 Despite committing a season-high 24 turnovers, the TCU Lady Frogs forced 31 Colorado State turnovers and sprinted past the Rams Saturday afternoon, 66-40. The win marked the Lady Frogs’ sixth straight and gave TCU its best start in conference play since 2005.

TCU (12-6, 4-0 MWC) was led by senior forward Emily Carter with 20 points, including six three-pointers. Carter, who was 0 for 7 from three-point range on Jan. 12 against Wyoming, said she had to adjust her shot.

“The last couple games it’s been short,” Carter said. “I haven’t been using my legs, so that’s kind of what I had to adjust today – using my legs more, getting more arch on the ball.”

Sophomore forward Starr Crawford played big in the paint, scoring 11 points and pulling down eight rebounds. Crawford, who missed three games after suffering a concussion against Fresno State on Dec. 4, has averaged over 11 points and eight rebounds since her return.

“I think she’s been locked in pretty good,” head coach Jeff Mittie said. “I’ve really liked her energy. She was out seventeen days with really not any conditioning other than the steps to get back to be able to get cleared.”

The first half saw sloppy play by both teams with a combined 35 turnovers.

TCU jumped out of the gates early, sprinting to a 10-2 lead and forcing seven turnovers by the 15:32 mark.

The Lady Frogs extended their advantage to 29-7 after a turnaround jumper by senior forward Rachel Rentshler with 6:30 to play.

But things quickly turned around.

The Lady Frogs led at the half, 35-22. Despite a 13-point advantage, Mittie said his team didn’t respond well to a sloppy game.

“The officials let the game be very physical, very sloppy, and we didn’t handle that very well,” Mittie said. “Obviously we’re shooting the ball well, so if we take care of the basketball, instead of a thirteen point lead it would probably be twenty plus at that point. We weren’t very fundamental today.”

Crawford carried the Lady Frogs in the opening minutes of the second half, scoring eight of TCU’s first 10 points to lead 45-29 with 13:35 remaining.

Colorado State never recovered, as TCU picked up its largest lead at 64-36 after a layup by senior forward Helena Sverrisdottir with 2:54 left.

The Lady Frogs shot 44 percent from the field in the game and connected on 6 of their 13 three-point attempts.

“While we didn’t play great today, there’s still enough that we can take away and feel good about,” Mittie said.

Since a heart-breaking loss to Georgia on Dec. 22, the Lady Frogs have turned things around.

Mittie said the sole focus has been on improving.

“Our group I feel like is coming in everyday trying to just get a little bit better,” Mittie said. “They’re not really focused on anything else, just improving.”

The Lady Frogs will be in action on Wednesday night when they take on BYU. The game is set for an 8 p.m. tipoff in the Daniel-Meyer Coliseum and will be aired on CBS College Sports.