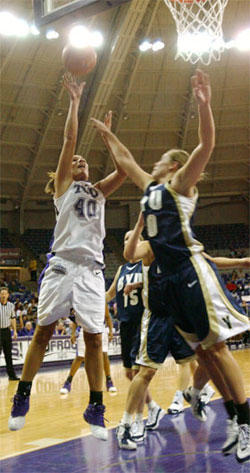 “I thought we were aggressive,” Lacy said. “We have to be. We use our speed and quickness to our advantage.”

Lacy’s contested three-pointer at the first half buzzer pushed TCU’s lead to ten, but Utah opened the second half with an 10-2 run that kept the Utes in the game.

“In the first half that’s the best defense we’ve played all year,” head coach Jeff Mittie said. “I feel like with this team I have to spark them. We work our tails off to get a 10-point lead at the half, then we give them seven straight points.”

The game remained close until senior forward Vanessa Clementino hit a three-pointer to push the Frog lead to 10 with under three minutes remaining, and the Utes were never able to get back within single digits.

One reason TCU was able to hold Utah to their third-lowest point total of the season was a rejuvenated perimeter defense; the Lady Frogs, who had been allowing opponents to shoot 37 percent from the arc, held the Utes to just 30 percent three-point shooting Saturday.

“We were switching on perimeter screens,” Mittie said. “We added that on Thursday. We figured we couldn’t guard it any worse. We were just trying to keep constant pressure on the perimeter.”

The Lady Frogs were also able to force Utah into 21 turnovers, 4 of which came from last season’s co-Mountain West Conference Player of the Year, senior guard Shona Thorburn.