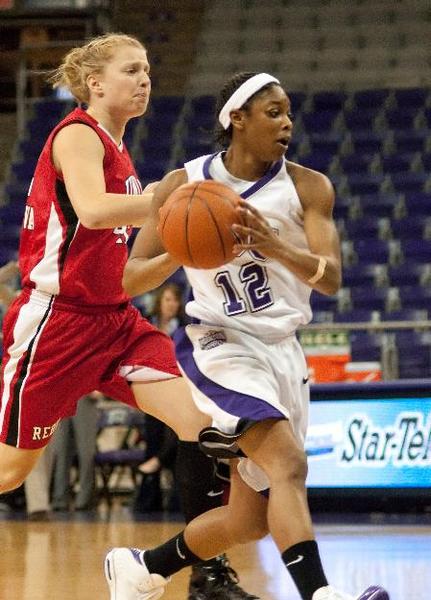 The Lady Frogs continued their recent dominance against the University of Nevada, Las Vegas by collecting their seventh straight win against the Lady Rebels Tuesday night in Daniel-Meyer Coliseum.

The Lady Frogs controlled the majority of the game and won 75-46. Head coach Jeff Mittie said the team communicated and shared the ball well.

“I think our team is really fun to watch play,” Mittie said. “When we play that way and share the basketball, and when we find the open person, we are a good team.”

Junior guard TK LaFleur led the team with 21 total points. Her effort helped the Lady Frogs to move to 15-8 overall and 7-3 in the Mountain West Conference.

The Lady Frogs took a quick lead in the first half with great scoring performances by LaFleur and sophomore guard Helena Sverrisdottir.

“We were just having fun and that kind of gives us a little spark to play even better,” Sverrisdottir said.

The Lady Frogs spread the UNLV defense out with quick give-and-go passes, and took a 44-25 lead into halftime.

Mittie said he couldn’t have asked for a much better first half.

In the second half the Lady Frogs began to cool a little, Mittie said.

“Our execution in the second half hurt us,” he said.

The Lady Frogs made up for the faltering execution with a strong defense, he said.

UNLV outrebounded the Lady Frogs 34-33, signaling a need for improvement on the boards, Mittie said.

“We didn’t win on the glass tonight,” he said. “I think we should have outrebounded them.”

Sophomore forward Emily Carter, who has averaged 15.8 points during conference play, contributed to the win with 15 points.

Sverrisdottir, who scored 16 points and had five rebounds, said the team’s win could be attributed to quick defense and an aggressive offense.

“We were really active,” she said. “We kind of knew we needed to drive it more. We needed to get drives and kicks because that was open the whole night.”

The Lady Frogs will go for their third conference win in a row Saturday on the road against Brigham Young University.