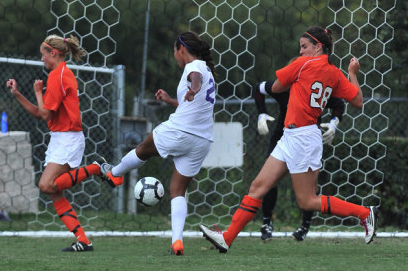 The TCU women’s soccer team lost 4-0 against No. 14 ranked Oklahoma State University after giving up key plays from the beginning of the game, head coach Dan Abdalla said.

“This was a tough game because it was not a 4-0 game by any means,” Abdalla said. “We gave up some goals and got behind, which really put us in a bad position.”

Neither team took immediate control of the game but OSU had a multiple opportunities to score early. OSU had three corner kicks in a row around the forty minute mark, but TCU rejected each one.

OSU continued to attack and eventually drew a foul on the Horned Frogs. On the ensuing free kick, OSU centered the ball in front of the Horned Frog goal, and goalie Kira Bartlett came out of the goal to get the ball. The ball took an OSU bounce away from Bartlett and OSU’s Megan Marchesano was able to kick the ball into an open net.

The Frogs ended the second half down 1-0 against OSU. TCU came out on the attack in the second half. They had two quick corner kicks and multiple shots on goal. OSU had a few shots of its own but couldn’t get any to go in until a freak play about midway through the half.

After the goal by Marchesano, nothing went TCU’s way. Trying to center the ball back to the goalie, TCU overshot Bartlett and scored on their own goal.

As hard as the defeat was, the TCU players knew that they gave all they had and are still on track to achieve their goals, senior midfielder Nikki Wilbur said.

“We had a few unfortunate bounces today, but I think we are on the right path towards our ultimate goal of winning a conference championship,” Wilbur said. “We have been working so hard and I think we are coming together as a team.”

The Frogs fell to 3-3-1 while OSU improved to 5-1. The Horned Frogs travel to Tennessee to play No. 20 University of Memphis on Friday.