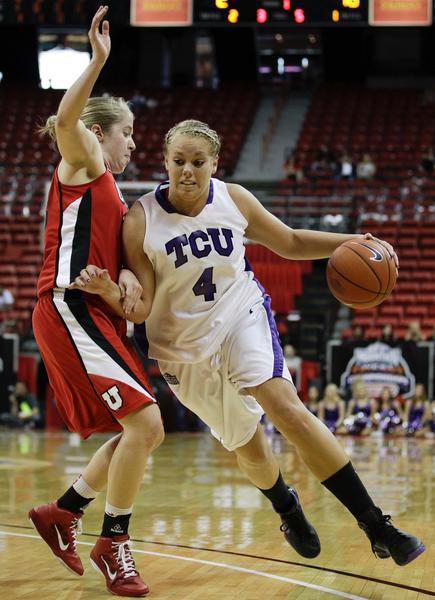 Seniors Helena Sverrisdottir, Emily Carter, Micah Garoutte, and Rachel Rentschler may have ended their TCU basketball career with a hard fought 52-47 overtime loss to Utah Saturday afternoon in the finals of the 2011 Mountain West Conference Tournament at the Thomas & Mack Center.

Sverrisdottir who led TCU in scoring, rebounds and assists, with 10, 8 and 4 respectively, said the early deficit definitely played a large factor in the outcome of the game.

“We obviously wanted to get a good start,” Sverrisdottir told GoFrogs.com. “That didn’t happen, but I think in the second half we came together.”

A three pointer in the opening minutes of the second period lifted Utah to a 13-point, 33-20, advantage.

A foul by Garoutte and a pair of Utah free throws allowed Utah to regain a one point advantage, 39-38.

The game’s leading scorer, Utah’s Michelle Plouffe, then sank a three pointer to give Utah a two-point advantage. Plouffe ended with 24 points and 11 rebounds.

A layup by freshman guard Briesha Wynn tied the game at 42-42 with 10 seconds left, and sent the game into overtime.

TCU started the extra minutes with a quick 3 pointer by sophomore forward Delisa Gross, but a 10-2 run by Utah throughout the remaining minutes of overtime sealed the win for Utah.

Coach Jeff Mittie, who was impressed by Friday’s showing on the glass against University of New Mexico, said he thought the rebounding hurt the frogs most. The Lady Frogs, who average 37.6 rebounds per game, had 29 total rebounds in Saturday’s matchup. The Utes had 38 rebounds and 12 second chance points.

“Credit goes to Utah though,” Coach Mittie said. “They played very physical. We seemed to struggle with that in the early part of the game. I thought we adjusted better as the game went on.”

Despite the loss, Mittie said he wasn’t disappointed by the team’s performance.

“We fought hard,” Coach Mittie said. “[I’m] proud of our group for fighting hard to come back. We take the lead in the early overtime and we just can’t make that one more extra play. “

Without the automatic bid given to the MWC Tournament’s champion, the four seniors and the rest of the Horned Frogs women’s basketball team now has to idly wait to watch ESPN’s NCAA Selection Show. The show airs Monday at 6 p.m. and will reveal if the Lady Frogs secured an at-large bid to the NCAA Tournament, which begins on March 19.

TCU has made it to the big dance in 9 of the last 10 seasons.

The Horned Frog defense only allowed 12 Utah points in the second half, an all time championship low for points in a half.