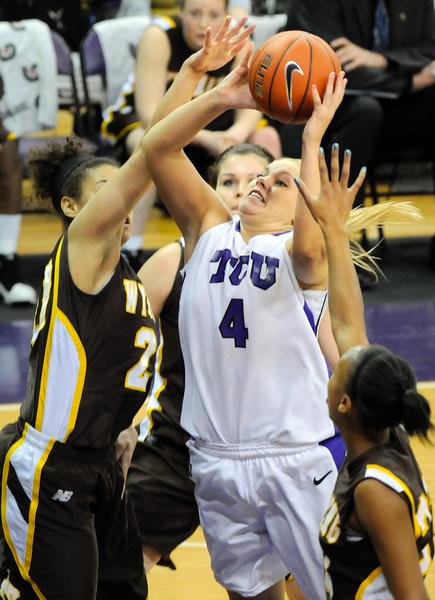 Sverrisdottir tallied 15 of her 18 points in the second half on 5-of-8 shooting, while Crawford connected went 9-of-14 (64.3 percent) from the floor. Senior guard Emily Carter was the only other Frog in double-figures with 13 points, including two key free throws down the stretch to seal the Frogs’ fourth-straight victory.

The Frogs, who overcame a six-point halftime deficit and forced Colorado State into 20 turnovers, ended the contest with 13 offensive rebounds, which resulted in a 20-6 second-chance advantage for TCU. The Frogs also scored 16 points off turnovers Wednesday night, while controlling points in the paint, 26-14.

Colorado State shot over 50 percent from the field Wednesday and was led by sophomore guard Meixandra Porter, who posted a game-high 19 points on 8-of-13 shooting. Rams’ freshman forward Sam Martin also had a solid night, scoring 10 points on 5-of-9 shooting from the field.

After forcing CSU into its third shot clock violation of the game with a block, Carter drained a triple the next trip down the court to make the score 29-26 in favor of the Rams early in the second half.

Sverrisdottir would bring TCU within six at the 13-minute mark on a tough lay-up, but the Rams answered right back scoring on a lay-up of their own to make the score, 39-31.

Sophomore forward Delisa Gross cut the lead to 41-37 with about 9 minutes to go in the contest, scoring on a back door lay-up. Sverrisdottir did the rest a few moments later, nailing two-consecutive treys to tie the game at 43-43.

The senior would take over down the stretch, pushing TCU’s lead to 51-48 on six-straight points, including a running lay-up at the 4:14 mark of the period, which was part of an 8-5 run.

Crawford would give TCU a 55-51 lead in the final minutes on two-straight buckets, but CSU continued to battle, cutting the lead to 55-53 at the 2:20 mark of the half.

Crawford would then proceed to beat the shot clock the next trip down the court to move TCU’s lead to four points with a little over a minute to go in the contest.

A couple of late free throws allowed TCU to escape Fort Collins with its fourth-straight victory.

The Frogs got on the board quickly when Sverrisdottir found Crawford for a layup right off the opening tip. Following an 8-1 run by CSU, Crawford brought TCU within three at 8-5 with a jumper from the corner.

A few moments later, the sophomore, who scored six of the Purple and White’s first 10 points, followed up a Frog miss to cut the early deficit to 10-7, while Carter tied the game at 10-10, drilling a trey from deep at the 11:06 mark.

Halfway through the period, a 10-2 run by the Rams was halted by senior forward Rachel Rentschler and Sverrisdottir, who brought the score to 20-15 with a little over 4 minutes to go in the half.

Crawford would go on to score the last six points of the half, but Colorado State took a 27-21 lead into intermission.

The Horned Frogs stay on the road, taking on league-leader BYU Saturday at 1 p.m. CT.

Colorado State has not defeated TCU since 1999.

Sverrisdottir moved into No. 6 all-time in games played.