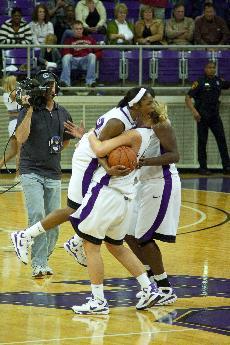 The Lady Frogs rode a 28-point performance and a pair of long runs to start halves to an 80-68 upset win over the No. 3 University of Maryland Terrapins.

Junior guard TK LaFleur, in her debut with the Lady Frogs, lit up the Terrapins for a career-high 28 points.

LaFleur said she didn’t want to force anything in her debut and just wanted to let the game come to her. The showdown with the Terrapins is something she had been looking forward to for a while.

“Since I came on my visit last summer and he (head coach Jeff Mittie) told me this was going to be our first game, I was preparing for it then,” LaFleur said. “I was so excited for this game.”

Mittie laughed, saying that at the time the game wasn’t officially scheduled but he was happy it helped to get the guard to TCU. LaFleur didn’t play in her first season with the team due to NCAA rules for transfer players.

Right out of the locker room, the Lady Frogs jumped out on an 11-0 run and never surrendered the lead to the Terrapins.

“We needed to come out with a lot of energy because we knew they would be a very aggressive team,” LaFleur said.

Seven of the Lady Frogs’ points in the run came off of Maryland turnovers. Sophomore Helena Sverrisdottir assisted on three of the buckets and drained a 3-pointer of her own during the run. She finished with 18 points to go with a career-high 7 assists.

“When we came in here we were not just coming in to play,” Sverrisdottir said. “We were coming in to win, and to get an 11-0 hit right away, we were like ‘Oh, wow, we can really do this.'”

The Lady Frogs tried to duplicate the performance to start the second half by going on a 9-0 run that included a pair of 3-pointers from LaFleur. The run put the Lady Frogs up by 16 after going into halftime with a 35-28 lead.

“We knew we wanted to come out and set the tone again like we did in the first half,” LaFleur said.

Maryland’s All-American guard Kristi Toliver was a non-factor in the game, going only 4-of-16 from the field for 11 points. The fourth-year starter averaged 17.1 points per game last season.

Mittie said it took a team effort to shut down the All-American. LaFleur, Sverrisdottir and freshman Antoinette Thompson all spent time covering Toliver.

The No. 3 Terrapins are the highest ranked team to fall to the Lady Frogs, tied with the University of Georgia. The Bulldogs were also No. 3 in the nation when the Lady Frogs knocked them off in the 2004-2005 season. Mittie is now 9-1 in season openers in his tenure at TCU.