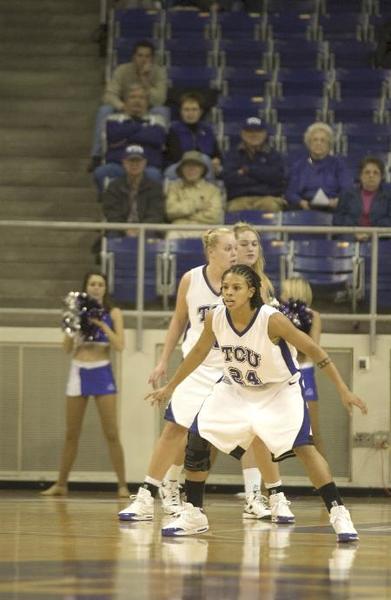 After a loss last weekend against the University of New Mexico, the Lady Frogs prepare for yet another game today without one of their key players.

Junior guard Eboni Mangum said she has decided to sit out for the rest of the season after playing 12 games with a torn ACL in her right knee.

Jeff Mittie, the women’s head basketball coach, said Mangum was the team’s best defender and a competitive player when it came to getting to the rim, even with her injury.

“She would hustle, grab some loose balls and get tips,” LaFleur said. “Her defensive presence made a huge impact on us.”

Mittie said the team has been slacking in Mangum’s strong areas – defense and driving the ball – and he hopes they will step it up today in the game against San Diego State University.

“I think this game is about us getting mentally tougher and physically tougher,” Mittie said. “For us to have success we have to be the aggressors in this game.”

Sophomore guard Helena Sverrisdottir said the team has been preparing for SDSU’s quick guards and intense defensive pressure, much like that from Texas A&M University.

She said SDSU is one of the best teams in the Mountain West Conference, and the Lady Frogs are hoping for a win after two home losses this season.

“Maybe we’re losing, but we feel like we’re not playing as good as we can,” Sverrisdottir said.

And as far as filling in for Mangum, Sverrisdottir said the team has to “find other ways to find the spark in the defense.”

Mangum said she will have surgery for her torn ACL on Feb. 6, and will then go through a six- or seven-month rehab. Mittie said he hopes Mangum will be ready to play again by late summer or early fall.

And though she won’t be on the court, Mangum said you can count on her to be on the sideline with support.

“I gotta support my girls,” she said. “I’m like the biggest cheerleader there is.”