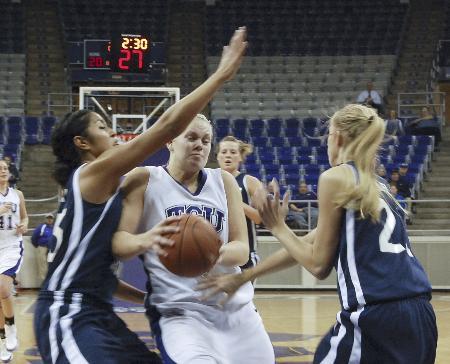 A Mountain West Conference title is no longer in the picture for the women’s basketball team, but head coach Jeff Mittie said ending the season with a win against a first-place University of Utah squad could help set the tone for the upcoming conference tournament.

“Both Utah and us are fighting for an NCAA tournament spot and knowing we could likely face them in the Mountain West Championship makes winning Saturday very important,” Mittie said.

“Rebounding has been our main problem all year and was a huge problem for us against Utah, particularly in the second half,” Mittie said.

Sophomore forward Emily Carter echoed Mittie’s observation, saying that rebounding is something the Lady Frogs need to focus on for Saturday’s game.

“You can’t play a game and lose the rebounding battle by 17 like we did last game against Utah,” Carter said.

TCU vs. Utah
When: 12 p.m. Saturday Where: Daniel-Meyer Coliseum


The Lady Frogs ended their six-game winning streak Saturday when they fell to San Diego State University 68-63. The team was able to cut a 14-point second-half deficit against the Aztecs, but could not manage a win on the road.

Saturday, the Lady Frogs will try to bounce back from their loss and end the regular season on a high note.

Junior guard TK LaFleur said winning this game could help establish the Lady Frogs as a team to beat before going into tournament play.

“I think a win could really let the other teams know we have come back pretty strong in the second half of conference and can establish the type of team we are and are aiming to be,” LaFleur said. After Saturday’s game, the Lady Frogs will travel to Las Vegas for the Mountain West Conference tournament starting March 10.