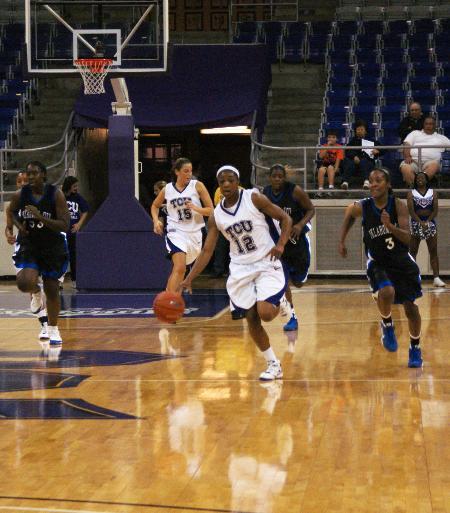 The first game of the season often gives teams a chance to get their feet wet and gain experience against a lesser opponent. That is not the case for the Lady Frogs’ 2008-09 opener.

TCU will face No. 3 Maryland at 5:30 p.m. tonight at the Daniel-Meyer Coliseum. The Lady Terrapins reached the Elite Eight of last year’s NCAA tournament before bowing out to Stanford and won the national championship in 2006.

“They’re very, very talented,” TCU head coach Jeff Mittie said. “They’re a team that has aspirations to win it all. They’ve done it before.”

When asked about stopping Toliver, Mittie joked, “We’ve told TSA [Transportation Security Administration] to stop her at the airport. I think we can get a 24-hour detainment. That might be the only way to stop Toliver.”

However, the Lady Frogs are not intimidated by Maryland’s tradition of success.

“That’s just something that’s pushing us to come out even more fired up on Friday,” sophomore guard Helena Sverrisdottir said. “We’re not coming in there just to play the No. 3 team in the nation. We’re coming in there to win.”

“We look at it as a privilege,” junior guard Shayla Moore said. “Maryland’s a really good team, but this just shows that we can compete with one of the best teams in the nation, and we can go out and get the ‘W.'”

As confident as they seem, the Lady Frogs also know that they have room to improve. Saturday’s last-second exhibition victory over Oklahoma City University proved that the team will need a better effort to knock off Maryland.

“We didn’t play hard enough at all,” Sverrisdottir said. “We were not happy about our hustle plays. We definitely want to work on that, and that’s what we’ve been working on in practice.”

Moore said she and the rest of the team need to focus on slowing down offensively.

“I think we need to improve on being patient,” Moore said. “We were really rushed when we played Oklahoma City. Our focus this week is more on being patient in the offense and running what we know to get the score.”

The Lady Frogs may have to face Maryland without Eboni Mangum, a transfer from Louisiana Tech University who sat out last season. Mittie said that Mangum injured the ACL in her right knee, but she may still be able to play.

“She’s tough enough and she seems to at least have a chance to see if this will work,” Mittie said.

As big as this game may seem, Mittie said it is important to keep things in perspective.

“I would never classify a game against a top 10 team as just another game,” Mittie said. “But it is one of 29.”

The Lady Frogs have posted an 8-1 record in their nine previous opening games under Mittie. Their only loss: an 84-62 setback to Maryland in 2006, when the Lady Terps were fresh off a national championship and were the top-ranked team in the nation.