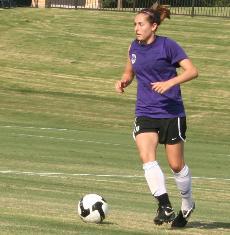 Excitement and light-hearted determination reside with the TCU women’s soccer team as they prepare for a widely-publicized match against the Mexican women’s national team Tuesday night.

The Horned Frogs finished last season with a record of 14-4-2, the best in TCU soccer history, but the Mexican national team has its own impressive resume and a roster padded with veteran players. Maribel Dominguez and Marlene Sandoval are two players to watch on the opposing team, TCU head coach Dan Abdalla said.

“They’ve competed at Olympics, they’ve competed at a World Cup level,” Abdalla said. “I can see it being a little bit of a jousting match back and forth, the players just trying to outduel each other, which will make it a lot of fun from that standpoint.”

“This is to get us better, get us ready for going into the Mountain West Conference,” Abdalla said. “We have four weeks to kind of get prepared for that.”

On top of a solid lineup, Abdalla said his team was in good general health, including healed injuries from the previous season.

“Yeah, I’ve heard that name before.” said Karoly, a senior forward from California. “It’s an honor and at the same time we want to go out hard and show them what we’re made of.”

“We’re just going to respect every player that comes out there on the field,” Taylor said. “Yeah, she’s one of the best players out there and everything, but I think as a team we’ll be alright.” Taylor said she was not worried about the Mexican national team because TCU has traditionally performed well under a large crowd and she felt confident with the team’s preparation.

The expectation of a large crowd is due in part to the amount of media coverage directed toward the game, which will include the local media, ESPN and Telemundo, according to Matt Hoover, the media relations coordinator for TCU Athletics.

The Garvey-Rosenthal Soccer Stadium is the usual battleground for the games with 1,500 seats and a press box, according to Gofrogs.com.

Friday, the TCU team traveled to Austin and upset the University of Texas Longhorns, ranked 15th in the country before the match. Sophomore Jordan Calhoun scored two goals, including the tie-breaking goal in the 85th minute which cinched a 2-1 victory for the Horned Frogs.