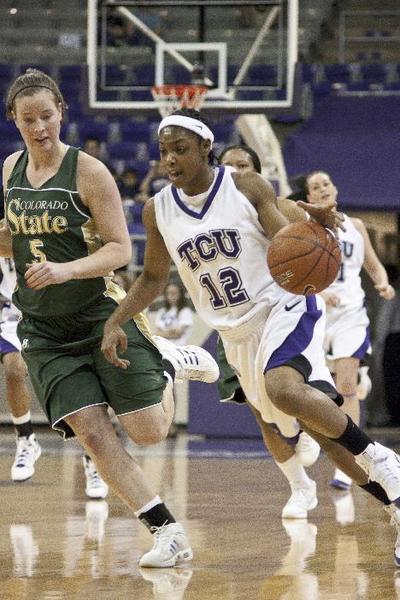 Although the Lady Frogs’ high-flying offense was impressive in the win over the Rams, the team proved it can play a little defense too.

“I think we did a really good job of shutting down their shooters,” said sophomore forward Rachel Rentschler.

The Lady Frogs held the Rams to just 31.3 percent shooting on the night.

The game against Colorado State (7-15, 2-7 MWC) was a rematch of both teams’ first game played in the Mountain West Conference this season back on Jan. 7, a 21-point TCU victory.

The Lady Frogs’ record now stands at 14-8 with a 6-3 clip in Mountain West Conference play.

Despite the win, head coach Jeff Mittie said the team still has room for improvement.

“I’m still not happy with our rebounding,” Mittie said.

The Lady Frogs still managed to outrebound the Rams 41-39, although the margin was down from the last meeting between the teams.

Turnovers, of which TCU had 19, are another concern, Mittie said.

“We seemed a little out of sync tonight,” he said.

The team certainly wasn’t out of sync in the early goings, as the Lady’s Frogs’ offense helped the team jump out to a quick 15-point lead.

But TCU appeared to cool off as the half progressed before regaining its form in the last few minutes. The Lady Frogs entered halftime with a 15-point lead, 40-25.

“It was kind of like a roller coaster the whole game,” Rentschler said. “We had our ups and our downs and we just need to start focusing and just going hard for 40 minutes.”

The Rams went on a run at the beginning of second-half play and rapidly closed in on the Lady Frogs’ lead. But the Lady Frogs held their ground, allowing the Rams to get within three points of the lead before retaking control just minutes later.

TCU fought their way back to a double-digit lead midway through the second half of play thanks to scoring bursts from sophomore forward Emily Cater and sophomore guard Helena Sverrisdottir.

The team’s lead ballooned to as many as 17 points late in the game. Successful clock management kept the Rams at bay until game’s end.

Sverrisdottir was the team’s leading scorer, and finished the night with 19 points, seven rebounds and four assists, despite getting in early foul trouble.

The University of Nevada, Las Vegas is up next for the Lady Frogs. In the two teams’ previous meeting on Jan. 10 in Las Vegas, the Lady Frogs outlasted the Lady Rebels 66-61. Tipoff is set for Tuesday at 7 p.m. in Daniel-Meyer Coliseum.