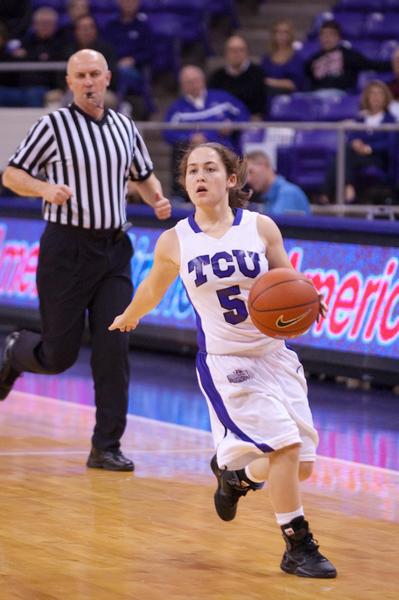 The TCU women’s basketball team hit the road to compete against University of Nevada-Las Vegas Wednesday for a chance to sweep the season series. Tip-off is slated for 9 p.m. CT at UNLV’s Cox Pavillion.

A win would better the Lady Frogs’ odds of recapturing first place in the Mountain West Conference.

Sophomore forward Starr Crawford did not convert any of her nine shot attempts. However, she contributed 10 rebounds in Saturday’s win over the Lady Aztecs.

The victory broke a two-game losing skid for the Lady Frogs. Their two previous losses were the first defeats the team suffered in conference play. By losing those two games, TCU fell a game behind first-place Brigham Young University (16-7, 8-1 MWC).

The UNLV Lady Rebels will play to end their three-game losing streak and rebound from their loss to BYU. In their last game, the BYU Cougars routed the Rebels to secure a 79-44 victory.

The Rebels as a whole shot 21.8 percent from the field.

The last meeting of the Lady Frogs and the Rebels was in early January. It was a barn burner with nine score ties and eight lead changes. TCU started to pull away with 3:23 left in the second half and concluded the game with a 68-60 final score.

Fans attending the game witnessed a piece of TCU history, as Sverrisdottir dished out six assists to pass Natasha Lacy as TCU’s all-time leader in assists in program history. She also netted 24 points, seven rebounds and had a career-high seven steals in the game.