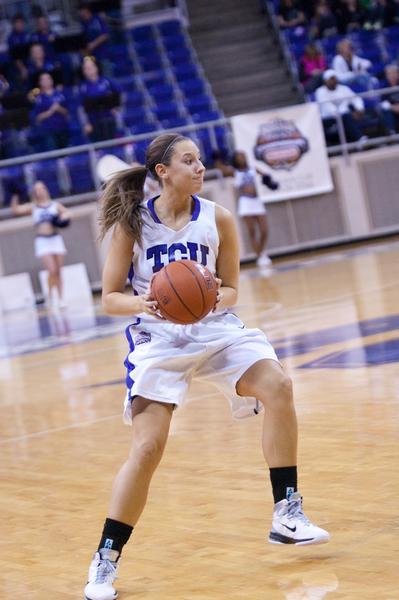 The Lady Frogs basketball team took sole possession of second place in the Mountain West Conference with a 65-54 win over Wyoming Saturday afternoon at Daniel-Meyer Coliseum. The game featured 11 ties and 12 lead changes before TCU put together an 8-0 run midway through the second half.

Wyoming senior guard Aubrey Vandiver hit a three-point shot that put the Cowgirls (18-6, 8-3) up 44-43 with under 13 minutes left. The Lady Frogs (17-8, 9-2) responded with three-pointers of their own from freshman guard/forward Briesha Wynn and senior guard/forward Helena Sverrisdottir before Wynn hit a baseline jumper with 8:39 to go that put TCU on top 49-43.

Head coach Jeff Mittie said the 8-0 run was the result of hard work.

TCU’s leading scorer and senior guard Emily Carter got off to a slow start after she made just one of six shots in the first half. She said she decided to get the rim more in the second half and finished with 16 points.

Sophomore forward Starr Crawford finished a rebound shy of a double-double with 16 points and nine rebounds. She became the Frogs’ go-to scorer in the first half when Carter and Sverrisdottir contributed just seven points combined.

Even though the Lady Frogs beat Wyoming 68-47 in Laramie, Wyo. the first time the two teams met, Mittie said he did not expect a second blowout.

For the Cowgirls, Vandiver led all scorers with 24 points to go with six rebounds. Sophomore forward Chaundra Sewell added 17 points.

Sverrisdottir moved past Sandora Irvin for most career starts as a Horned Frog Saturday with 119. Sverrisdottir, a native of Iceland and nicknamed “Ice” by her teammates and coaches, finished Saturday’s game with 11 points and six assists.

“It says a lot about (Sverrisdottir’s) versatility,” Mittie said. “Because we can move her to four spots, we were able to play her as a freshman at power forward. That’s how you get that many starts.”

Mittie then paused and added that staying in the good graces of the head coach helps too.