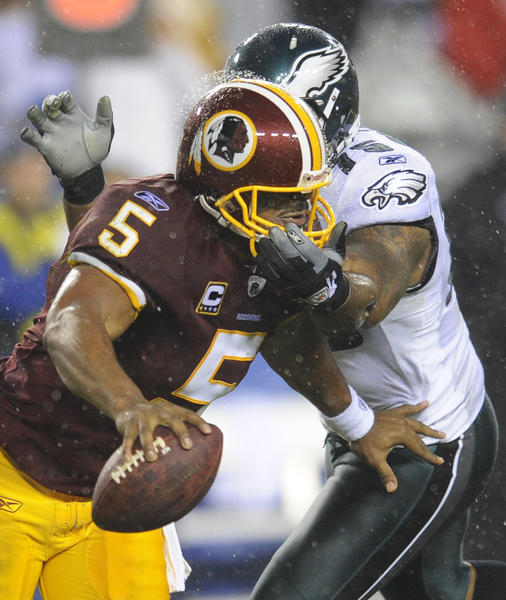 Who needs to man up this week? Donovan McNabb.

On Monday, McNabb and the Washington Redskins reached an agreement on a $78 million, five-year contract extension. How did McNabb reward his team? By getting completely destroyed on national television by his former team and divisional rivals, the Philadelphia Eagles.

McNabb had one of his worst games of the season, completing only 54 percent of his passes, throwing three interceptions and having a quarterback rating of 69.4. McNabb never looked comfortable, making mistakes and poor throws throughout the game.

So why did the Redskins reward the 33-year-old with a lucrative contract? Sure he has an immense amount of talent, but he is also on his way to having the worst season of his career. Through nine games he has thrown for just nine touchdowns and 11 interceptions while being sacked 24 times.

His completion percentage this season has been dismal. He has completed only 57 percent of his passes overall. He hasn’t completed less than 60 percent for a season since 2006, when he tore his ACL and missed the second half of the season.

Of course it doesn’t help McNabb that the players surrounding him are not the elite playmakers that he had in Philadelphia. I guess he has Santana Moss but even then, Moss has been a streaky player. He could go for 150 yards and two touchdowns, or one catch for 13 yards.

So who else do the Redskins have? Their other receivers are Joey Galloway, Anthony Armstrong and Devin Thomas. The only guy you might have heard of is Joey Galloway, but this 38 year old isn’t the playmaker he once was.

They do have Chris Cooley as tight end. He has proven to be a constant target in years past, but he hasn’t been able to stay healthy enough to be a factor the past two seasons.

The running back doesn’t get much better in terms of talent. Clinton Portis has run out of gas and is no longer a running back that can carry the ball on every down. Not to mention, the offensive line has been rebuilt every year over the past 10 years.

So why sign a five-year contract extension? It doesn’t make sense any way you look at it. McNabb was going to be a free agent at the end of the season and sign with the team of his choosing. This could have landed him with a team like the Minnesota Vikings, Arizona Cardinals or the San Francisco 49ers. All of those teams have a higher talent level than the Redskins.

Now that McNabb has the money he wants, it’s time for him to man up.

You have your long-sought-after lucrative contract, so get out there and save your season. Not only were you elected captain of your football team by your peers, but you are the leader of the offense and you need to live up to your bidding.

If you don’t, you could end up being cut by the Redskins at the end of the year and be without a whole lot of job offers that would earn you the kind of money you want.