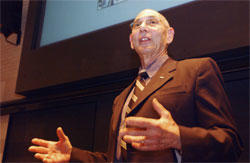 The challenges for today’s leaders will change, but the essence of leadership is the same as it was 7,000 years ago, a general told the Air Force ROTC Thursday.William Cohen, a retired major general for the Air Force, said that although his eight universal laws of leadership are important, they do not make a leader.

“Techniques of leadership, yes, they are important,” Cohen said. “But who you are inside, that’s the main thing.”

He said successful leaders must have “The Stuff of Heroes,” which, not coincidentally, is the title of one of his 52 books and consists of eight laws of leadership.

Cohen, who graduated from West Point, received his master’s degree from the University of Chicago and his doctorate from Claremont Graduate University. He is currently president of the Institute of Leader Arts at Touro University International. Cohen flew 174 combat missions in Vietnam and in the Israeli air force in the Yom Kippur War. He has received the Distinguished Service Medal, the Legion of Merit, the Distinguished Flying Cross and the Air Medal.

The room full of cadets shifted in unison to greet the military leader with a resounding, “Good afternoon, sir!” and sat attentively through his lesson, asking questions when the lecture ended.

Cohen, who used PowerPoint to teach the basics of leadership, said with a laugh that technology helps remind him of his age, though moments later he had figured out the system and shifted the tone to the topic at hand.

“A battle is the only case I know of in leadership where most leaders and followers would rather be somewhere else,” Cohen said.

Leadership in combat can be applied to other situations, and Cohen compiled his list of important leadership qualities only after studying 200 combat leaders who also got out of the military and led elsewhere, he said.

He presents his ideas about integrity last because it is the basis of all leadership, the most important thing, Cohen said. Leaders have to keep their word, guard their principles and tell it like it is, he said. He cited as a prime example someone who gave up everything for his principles – a general who stepped down from his position because he did not agree with his superiors.

Leaders also have to be knowledgeable, declare expectations, show uncommon commitment, expect positive results, take care of people, put duty before self and get out in front, Cohen said.

He said leadership is not just about ranks and that to be a leader, “all you have to do is stick your hand up.”

Declaring expectations means having vision, he said, pointing to a picture of a processionary caterpillar. These caterpillars, he said, attach to one another and follow the one in front, “the guy with the vision.” He said when separated, the next one in line will take charge, but when alone, they crawl around in circles because there is no one in front with an objective.

Corrine Young, a senior advertising/public relations major, said she was grateful to listen to someone of Cohen’s caliber and that it is always valuable to hear from someone who “has been there and done that.”

Closing out his PowerPoint presentation and emerging from behind the lectern, Cohen said students need to find something they like to do. He said he loved the air force, but that as a leader, students must find what motivates them.

“You’ve got the ball,” he said, “But I know you’ll meet those challenges.