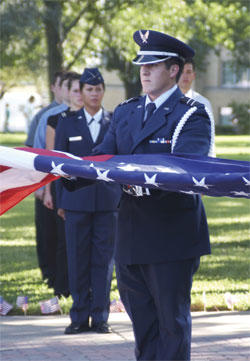 A retired lieutenant colonel spoke to ROTC students and their guests Thursday about the challenging experiences of war as part of the Prisoners of War/Missing in Action Remembrance Ceremony.Lt. Col. John Yuill talked about his personal experience of being a prisoner of war in North Vietnam to about 85 people in the Robert Carr Chapel.

“War is hell, but it’s worth dying to protect fellow Americans,” Yuill said.

People will complain about war, but survival is up to brothers and sisters in arms, Yuill said.

He continued by saying after the crash, he made the decision to bail his crew and himself out of the plane. They were then captured and held as prisoners, but all returned home to the U.S. a year later, he said.

“God forbid any of you become POW’s, but if you are, I hope you will be as fortunate as I was,” Yuill said.

Leland Foland, a veteran of the 99th Airborne Air Commandos, attended the ceremony because he was invited by the TCU Air Force ROTC and because he has friends who are still missing in action, he said.

It is important to remember those who served, Foland said.

“If you can speak English, thank a teacher. If you enjoy your freedom, thank a soldier,” Foland said.

Emily Grinsfelder, a senior kinesiology major, said she thought the ceremony was an inspiration.

“My grandpa was in war,” Grinsfelder said, “so this meant something to me.”

Alicia Davis, a junior management major and ROTC member, said she thought this year’s ceremony was a success and had a better turnout than in prior years.

“It was more personalized because the speaker was an actual POW,” Davis said.

Adrian Delacruz, a TCU ROTC member who attends the University of Texas at Arlington, said he learned a lot about what it was like to be a POW.

“Yuill was great at describing his experiences with emotion,” Delacruz said. “Being a POW must be a humbling experience.”

Jessica Murray, a commander of Arnold Air Society, said TCU’s ROTC has held ceremonies for more than 20 years to honor POW’s and those missing in action.

“We want to raise awareness, because not everyone realizes that all those who go to war don’t come home,” Murray said.

Yuill was chosen to speak because he lives in Fort Worth, and flew out of Carswell Air Force Base before his plane was shot down in 1972, Murray said.

After the speech, ROTC members lit candles while repeating the oaths of the POW code of conduct. The ceremony then moved to the flag pole for a three gun salute, followed by the playing of Taps.