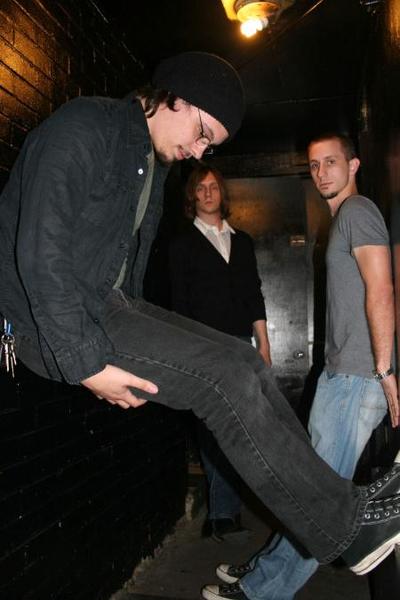 If you’re tuned in to the local music scene, you might have heard the name Jefferson Colby before. You might have even heard the trio’s driving bass lines, pulsing percussion and experimental guitar work along Berry Street on some busy weekend night. Self-described as a hybrid between Pink Floyd and Nirvana, the band has been pumping out songs and live shows since their formation in 2004.

Danny Mabe, the band’s guitarist and lead vocalist, said the album contains a number of brand new songs, in addition to tracks some may have heard them play on stage during the past few years. The album is about not wanting what you have, he said.

Matt Mabe, the band’s drummer, said listeners could expect a blend of different genre influences and tempos as they hear the band’s songs.

Moore, the bassist, said the musical variety on the album is characteristic of Jefferson Colby’s sound.

“It’s an amalgam of everything we’ve done so far,” Moore said. “I’m very excited about it.”

The tracks were recorded in what Moore called a marathon: a single session lasting roughly 16 hours. Because the songs were recorded in the same sitting as their last release, a six-track EP called “My Cosmic Self”, it should be no surprise that there are elements of similarity across the two albums. What separates them is the added depth of melody on “Octopus” as a result of several interesting additions that were recorded in a later session: piano, synthesizer, Mellotron and female backing vocals are featured on several tracks.

The band has a strong local presence, as illustrated by three consecutive years of nominations in the annual Fort Worth Weekly Music Awards. But the musicians agree that Jefferson Colby is not limiting the reach of its music to the Lone Star state.

“I wish I was in a different city every day, playing a different set list,” Danny Mabe said.

Their talent hasn’t gone unnoticed: earlier this year, the trio turned down a five-album record deal because they wanted to retain creative rights and freedoms.

“I got really scared when there was a publishing agreement that was 50-50,” Danny Mabe explained. “Like, how is someone else supposed to own my thoughts – my own thoughts that came out of thin air?”

That air is still filled with potential, it seems.

“We have a whole ‘nother album written, we just haven’t recorded it yet,” Matt Mabe said.

The band plans to release their next album, “Semantics (Metaphysical Mood Music)”, in 2010.

Join the band at The Moon tomorrow for the release of “Octopus.” They will sell the album for $5.