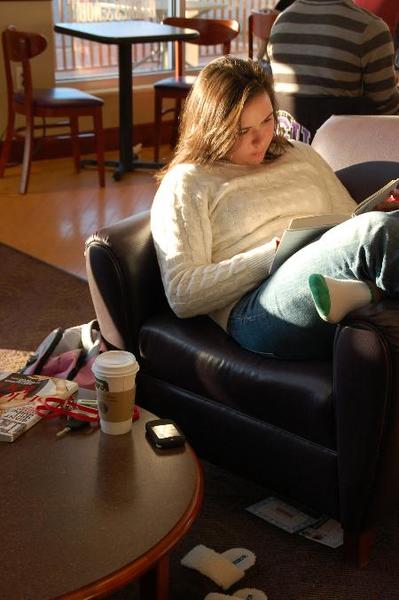 Students are keeping the local business around the university running regularly regardless of the economic downturn.

“We are following a normal game plan,” Lewis said. “Everything is normally planned out in our marketing calendar.”

“We always have what the students need,” Lewis said.

She said because of the successful football season and the beginning of the basketball season, the bookstore is actually looking to increase sales to TCU sports fans in the community.

Lewis said the bookstore has a good relationship with the professors at the university, and 70 percent of the professors have already placed book orders for next semester.

The bookstore is putting more money in students’ hands, Lewis said, because when students sell their books back to the bookstore which professors will need for next semester, the bookstore will buy those books for half the original price and that is higher than the wholesale price.

“We have a proactive and optimistic view of the future,” Lewis said.

She declined to comment on the percentage change of the revenue of the bookstore.

Local restaurants around campus don’t see the future as negative either.

Heather Martinez, manager of Potbelly Sandwich Works on University Drive, said the restaurant is doing well, especially because of the partnership Frog Bucks with the university.

Frog Bucks are dollars loaded onto student ID’s. Besides unlimited access to the Market Square, if students have purchased a meal plan, students can spend Frog Bucks on any campus dinning location, and at participating off-campus dining locations.

Martinez said the whole Potbelly Company is doing well because of the inexpensive quality food and fast service.

“We also have a good location,” Martinez said. “And we are definitely student-driven.”

Martinez said the restaurant is going to serve breakfast in January 2009, and will open at 7 a.m.

Shawn Placencia, manager of Fuzzy’s Taco Shop on Berry Street, said the business of the restaurant is still doing well and the restaurant still has regular numbers of costumers coming, especially students from the university.

“We are watching the food prices,” Placencia said. “But we didn’t cut any budget of the restaurant.”

Nathan Mann, a freshman political science major, said he sometimes eats off campus at the restaurants around campus but not often, and added that the economy isn’t affecting his way of life much.

“Now the gas is cheaper so I have some extra money to spend on something else,” Mann said.

Alexis Fernandez, a junior strategic communication major, said she has started eating less often in restaurants, especially the ones around campus. Instead, she started bringing lunch to school more often.

“Now the economy is bad so I need to save some more money,” Fernandez said. “I also have to pay my rent and gas, so going grocery shopping and cooking at home is a lot cheaper than eating out.”