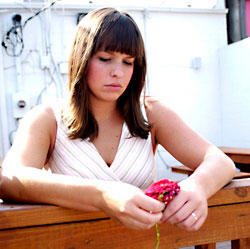 Theatre TCU’s “Lone Star” and “Laundry & Bourbon” will feature a battle of the sexes.The companion plays reveal it all. From the truth about men and women to love and war, playwright James McCLure covers these issues in two plays according to the production press release.

“Lone Star” and “Laundry & Bourbon” are directed by two students in the Studio Theatre of the Walsh Center on Oct. 11 to 13, said junior theatre major Jessica Lind.

Lind, the director of “Lone Star,” said she is nervous about directing a play for the first time. She said she hopes the production lives up to the poetry McLure wrote in 1979.

“Lone Star” and “Laundry & Bourbon” are two separate acts and will be separated by an intermission, but the productions will be presented as one play because they correspond with each other, said senior theatre major Jessica Broadaway.

The setting for both plays is Maynard, Texas, a fictional small town, Lind said. It renders the idea that a small town doesn’t coincide with “simple,” she said.

“The simple life is not so simple,” Lind said.

The theatre department selected both plays, Lind said, and the reason she applied to direct “Lone Star” is because it speaks profoundly and is funny.