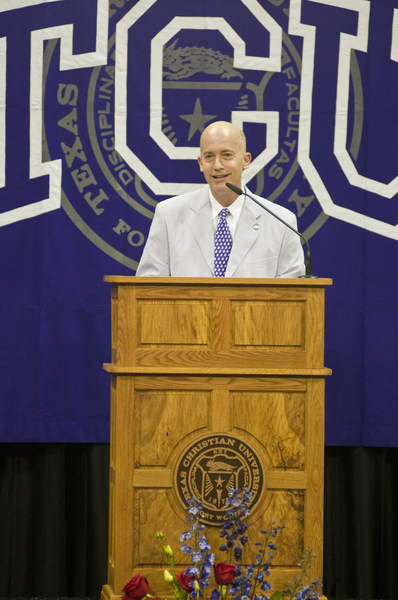 Faculty and staff, many of whom were dressed primarily in purple, celebrated the century of partnership between Fort Worth and the university at the annual faculty and staff luncheon on Friday in Daniel-Meyer Coliseum. Fort Worth Mayor Mike Moncrief was the guest speaker at the event.

During Moncrief’s speech, he told members of the Horned Frog family that it was important to be an ambassador and represent the university at all times.

Chancellor Victor Boschini said one example of a great ambassador for the university is head football coach Gary Patterson, who received the Chancellor’s Staff Award for Outstanding Service during the luncheon.

Boschini wrote in an e-mail, “[Patterson] is definitely one of the staff members who travels around the country a lot8212;both for the actual games and for recruiting new students. Every place he goes he is a living/breathing representative of all that is Texas Christian University.”

Patterson said he was surprised and humbled that he won the award.

“It is one of the highest honors I have ever received,” Patterson said.

Moncrief also spoke of the relationship between Fort Worth and the university. He said that the Horned Frogs are Fort Worth’s hometown team. He encouraged everyone from TCU and Fort Worth to wear purple on Fridays to show support for the university.

“People want to be part of what is happening at TCU,” Moncrief said.

Boschini wrote that Fort Worth provided university students with a safe and stimulating environment, and it gave students a home away from home.

“The city of Fort Worth gives us an absolutely incredible place to call our home,” he wrote. “From the day I arrived here I always thought that the two were intertwined in such a wonderful way… It is my fondest hope that the two of us, Fort Worth and TCU, have an enduring and happy marriage.”

“I feel like [since the time that I have worked at the university] Fort Worth has become more engaged in TCU,” Wagner said.

According to the university website, TCU was founded in 1873 by brothers Addison and Randolph Clark in Thorp Spring, Texas, as AddRan Male and Female College. The school moved to Waco in 1895 and the name was changed to Texas Christian University in 1902.

TCU relocated to downtown Fort Worth in 1910 when the Waco facility burned. Several other cities, such as Dallas, extended offers to become the new location for the university, but Fort Worth ultimately gave the best offer. The university rented buildings downtown until it moved to its current location in 1911.

This year marked the 100th year since the university had been located in Fort Worth.